Julianne just wants that old spark back in her marriage. Her husband Logan is too preoccupied with making their business bloom. When she's rebuffed one too many times she does some soul searching. Her search leads her accidentally to a very handsome man with a dominant streak a mile wide. Who wants her. Really wants her in a way that excites her to no end.

Julianne is shocked to see how far she will go for Max and how readily she falls under his spell. Even from the first moment where she admits that she's looking for something and she thinks it's him, she acts with a pure lusty reckless streak she's never experienced. Max pushes her to a place, both emotionally and sexually she's never imagined. Julianne would do just about anything to please him. Even after her husband finds out.

The ultimate question becomes will her affair with Max bring Julianne and Logan closer together or be the final straw in their struggling marriage? 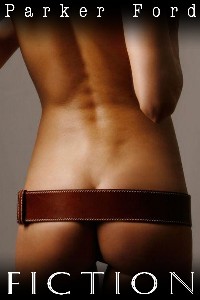 "I love a story that makes me forget I’m reading, makes me feel like I’m part of the characters and leaves me longing for more well after the final page is turned. I want to feel a story, even when it makes me uncomfortable. Fiction is just this kind of story. This was a book I found impossible to put down."

“So you are the office guru?” he asked, taking her hand, helping her up an outcropping of roots from a tree that made Julianne feel very small and very new. The tree looked ancient and gnarled and soared to the blue cloudless skies overhead.

“I am. I am the office guru. I schedule and order paper and handle advertising. I run specials and keep books and order supplies. I deal with machinery orders and blades and sharpening services and do payroll.”

“And?” Max asked, turning to her. He smiled against the sun. She liked the mildly weathered look of his face, the brown stubble poking through the skin of his chin and his cheeks. She watched his Adam’s apple bob and wondered what it would be like to lick him there. And then lick his neck all the way down to his hard chest. And then, as her cheeks bloomed red and hot, she wondered what his cock would taste like. Would his skin taste like warm cotton and salt and sweat?

“You’re thinking bad things, aren’t you?” He touched her bottom lip and she felt the electricity of his skin on hers run her through like an electrical shock.

Julianne ignored the question. “What do you mean and? Isn't all that enough?”

He turned, his broad back to her as he crested the hill. She studied his wide shoulders swathed in a well-loved, often-washed red shirt advertising some tool company. “Sure it is. But you strike me as someone who has a passion.”

“I used to write,” she blurted. “I just started a journal again,” she said. What she meant was the document titled FICTION in her computer that was basically a dirty little diary of fantasies. One of them including him. The admission of her new journal had her feeling a bit guilty but wildly excited, too.

He turned to face her, fast, like a snake striking and her arms wheeled to keep her balance–she'd never been the graceful one. The April wind felt like a tornado in her head but he reached out, easily, and steadied her. Pulling her forward onto an outcropping of flat rock–knotted along its edges were various root systems and vines. Max pulled her in so she could smell the bright sharp smell of his detergent and the darker, earthier smell of him. He tugged her flush to him and she felt the ridge of his cock along the front of her pelvis. Julianne didn’t think, she simply tipped her hips up just a bit to feel his hardness further down along the line of her pussy lips, against the nub of her cit. All her nerves sang out and she sucked in a breath that felt too small in comparison to her need for oxygen.

“I like you, Julianne,” he said to her. His lips pressed hers. Gently at first. But when she gave into her curiosity and touched him gently through the worn denim of his jeans, he kissed her harder. A rough noise scraped out of him and she felt her skin pebble in goose flesh. That sound he made had her almost scared, but not enough to stop.

“I like you, too,” she said, rubbing her fingers along him faster. She kept one hand behind her back as if her actions didn’t count that way. He noticed.

Max snagged her other wrist and pulled her forward so her body tipped off balance. He moved deftly under her arm and away from her. His big hand pinned her smaller, paler one to the rock outcropping, he had her facing that way somehow and then he was behind her. She felt like a prisoner being arrested. Like a wrong doer, a thief, a crook. He pressed himself along the back line of her body. The tense muscles of his thighs pressed to the back of her legs, the jut of his knee banging into the hollow behind hers. He kicked her legs wide and pressed her other hand up on the rock ledge to match the first. “I think I like you right out here. I’m right out here with just you and me and the sun. And I want you. Really bad,” he said right against the side of her neck.

Max’s breath was hot and harsh on her skin and her eyelids drifted shut from her sudden jolt of emotion. Excitement and fear swirled into a heady mix of anxiety and need. She shook her head.

“You don’t want me?” he asked, licking the lobe of her ear so softly that at first Julianne was sure she had imagined it, until she felt the wetness drying on her ear. His tone was part amusement, part warning.

She hung her head, breathing hard, the sun feeling like a blast furnace out of the blue. “I do. I do want you.”

“Out here? Right now? Will you let me have you now?” he asked, his hand sliding up the inside of her thigh, hard and pointed like a knife. It sliced the void between her legs where only air nestled until it finally found a home pressed to the split of her body. His thumb bumped the wet slit of her pussy and she swore, despite pants and panties, that she could feel the intense heat of his skin.

“Say it, then.” His hands had already snaked around her waist from behind and he was working her button, her zipper.

“Take me,” she said and she heard the tone in her voice. The naked urgency that made her blush but also made her throw her shoulders back defiantly. Even as he pushed her pants down to her knees, even as he forced her panties to follow. She kicked off her shoes and stepped out of them when he prompted.

Max chuckled softly and there was a darker quality to it than when they were sitting in the sun drinking coffee. There was an intimate quality to his laughter. “But I am a stranger. I am a total stranger to you, Julianne and I could do anything to you. Anything at all.”

The Choosing
Darcy Sweet
In Shelf
$6.99