Forty-eight year old art gallery owner Paul Strait loves the nightlife—wild parties, stiff cocktails, and even stiffer men! But his decadent lifestyle has grown lonely and now he’s looking for love. Some days it seems the perfect guy must be a fantasy, so he enlists the help of Madame Eve. After all, a fantasy service like 1Night Stand should be able to deliver his fantasy man, right?

Josef Debrossé runs an exotic gay bar in the Caribbean known only to locals and select tourists. The many patrons coming in and out of his bar ensure he never has a shortage of lovers, but he’s grown tired of being just a vacation fling. He wants to be another man’s lover and partner, not a mere souvenir from the islands.

Lost in a dance of lust and allure, both men are thrilled with Madame Eve’s choice for them and have an instant, intense connection. Flirting over drinks quickly leads to the bedroom. But after their fiery lust has been quenched, the night goes from fantasy to reality without warning. Secrets and frightening pasts threaten to shatter the magical illusion of their perfect date.

Will this budding romance survive in the face of reality? 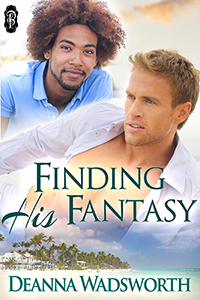 Before he saw it coming, Josef swept in, drawing him into a brief embrace before kissing each of his cheeks. He shivered from the warmth of a beautiful male body pressed against him. While everyone knew cheek kissing was the norm in many cultures, the brush of the man’s lips made him stifle a giggle.

Josef stepped back, not letting go of his hand.

A warm, tropical breeze teased the faint wetness those kisses had left on his cheeks, a whisper of an imagined memory—one he never wanted to forget. Josef had thin, well-cared-for dreadlocks that landed just below his collar. Paul wanted to reach out and touch them, make sure he was real. Or, better yet, hold them tight like reins while he plowed the man from behind…. Jesus! His skin flushed and his groin stirred, more than pleased at Madame Eve’s choice for him this evening.

“I am Josef Debrossé.” He had yet to release Paul’s hand—not that he had any complaints—and his blood warmed from touching a total stranger he’d paid to meet.

He let out a breathless chuckle, not surprised he’d been holding his breath. “Paul Strait,” he replied, caught up in something...giddiness? Excitement? Sexual tension? He wasn’t sure, but he felt like a silly girl swooning on her first date. Almost as an afterthought, he added his signature tagline, “And I’m anything but.”

A rich resonant laughter danced around them, weaving a spell and capturing Paul inside it until he didn’t even know which way was up or down.

When Josef released him, he had to resist the urge to take the man’s hand back and never let go, fearing he might disappear. Instead, he downed the rest of his champagne, scolding himself for being so ridiculous. He nodded toward the bar where plenty of stools sat open. “Can I buy you a drink?”

At the resort, everything was included, but it seemed like the most logical thing to say. Much classier than, “Are you wearing underwear?”