Finding The One Box Set (MM)

Four short contemporary gay romances by best-selling M/M author Nell Iris about finding -- and holding on to -- “The One.” Collected together in an exclusive box set for the first time are the stories:

Unconditionally: After six years together, Luca and Gus are finally getting married. On their wedding day Luca’s mother sees her flamboyant son wearing a veil and explodes. Her hateful words trigger traumatic memories and instead of walking down the aisle, Luca runs away. When Gus realizes Luca is missing he follows him, intent on convincing him to come back. Will he succeed in time for the wedding ceremony?

Find His Way Home: Elliot is miserable living in the big city. He longs for tranquility but is unwilling to move away from his partner Mick. After a dramatic event, he flees and goes back home to a cabin in the mountains. Slowly he regains his calm, but being away from Mick is hard. When a ghost from Elliot's past shows up, he’s faced with a hard decision: stay on the mountain alone or go back to the city, and Mick?

Nobody Else’s: Beckett Cooper has been secretly infatuated with his BFF’s younger brother Levi for years. Levi Byrne has liked Beckett for as long as he can remember. When an opportunity presents itself for them to get to know each other better, they both grab it and make the best of it. Will the stars align in their favor and lead Beckett and Levi to a happily ever after? 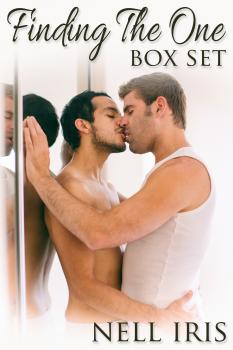 Finding The One Box Set (MM)

EXCERPT FROM "Find His Way Home"

He spent the rest of the afternoon pacing his living room with Lady Gaga blasting from the speakers. He heard his phone ring at some point, but ignored it and kept pacing, rubbing his palms on his head, tousling his short hair. The phone rang several more times, but Elliot walked and walked, until the front door flung open and a wild-eyed Mick stood there, glaring at him.

Mick’s gaze roved over him, making sure he was okay, and then he marched over to the stereo and cut off Gaga in the middle of a rah-rah. “What the hell, Elliot?”

The curse stopped Elliot's pacing, and he stared at his lover with wide eyes. His well-spoken, hot-shot lawyer partner never used profanities. During their time together, Elliot had heard him swear maybe once or twice, and him doing it now knocked the wind out of Elliot's fury. He groaned, grabbed his lover’s hand, and hauled him over to the couch where he sank down, pulling mick with him.

“I can tell. What happened?”

“I let them buy me, that’s what happened.” Elliot spat out the words.

“What?” The question was so loud Elliot flinched. Mick sighed, stood and shook off his coat, unbuttoned his suit jacket, and kicked off his shoes. Then he sat back down, turned to Elliot, and wrinkled his nose when he saw the state of his hair. “It looks like you’ve tried to pull it out,” he muttered, and ran his fingers through Elliot's locks, trying in vain to tame it. “Tell me what happened.”

When Elliot recounted the afternoon’s events, Mick grabbed his hands and drew him closer, and he followed willingly. He ended up straddling Micks lap, arms around his neck, and his forehead leaning on his lover’s shoulder.

“I’m so sorry,” Mick mumbled and rubbed his stubble against Elliot's temple.

“I shouldn’t have taken the money,” Elliot grunted. “I’m so stupid.”

“You’re not stupid. You had no other choice.”

“What else could you have done?”

“I could have told them to go fuck themselves,” he gritted out. He took a deep breath, forcing himself to calm down. “Or I could quit.”

It was several minutes before Mick asked, “And do what?”

Elliot held his breath for a moment before whispering, “I could go back home.” Mick stiffened. “I hate it here.”

“I know.” The thickness of Mick’s voice hit Elliot like a freight train, but he didn’t take back his words. He couldn’t.

“I have to go home. At least for a while. I need silence.” He caught his lower lip between his teeth to stop it from quivering. “This was the last drop, you know?”

Mick nodded and tightened his arms around Elliot until they felt like bands of steel surrounding him. “What about us?”

“I don’t know.” He hesitated. “You could come,” he whispered, knowing what the answer would be.

He heard Mick inhale a shuddering breath, and a drop of wetness landed on Elliot's cheek. “I wish I could.” Mick’s voice trembled.

When their tears finally dried, they spent the rest of the night making desperate love, saying nothing, letting their bodies do all the talking.

Two days later Elliot was back home, enjoying the peace and quiet in a freezing cabin in the mountains. Trying to stifle the disillusionment he felt with the world and himself, while hoping he would have time to get over it before it was time to go back to work. 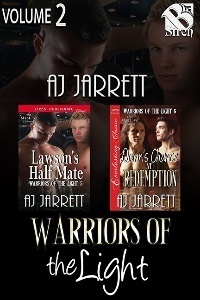 Warriors of the Light, Volume 2 (MM)
AJ Jarrett
In Shelf
$3.99
Tweets by
sirenbookstrand