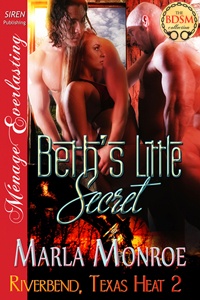 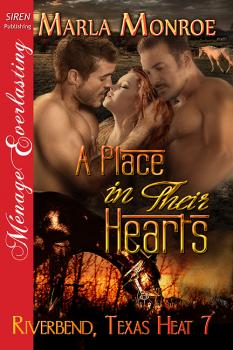 Sierra Jane Wensel kicked the tire with enough anger to have made a field goal if the tire hadn’t been attached to the beat up old Ford truck. Instead, she cursed as pain shot through her foot and up her ankle so that she hopped around on the side of the road like an idiot.

“Damn stupid tire. I’m going to be late now, and God knows that won’t go over well with Mr. Punctuality.”

She limped to the back of the truck and let down the tailgate, praying the entire time she had a spare in the back. The sight of the tire had her smile back in place until she realized that it was just as flat as the one on the front of the truck.

Hell fire and damnation! What did I ever do to warrant this mess? Never mind. I’d rather not think about it.

Climbing down from the back of the truck, Sierra forgot about her injured foot and landed on it first. The next thing she knew, she’d hit the ground on her ass. That wouldn’t have mattered except that for once in her life, she was wearing a dress. Since she didn’t wear them as a rule, she had no clue how to actually act in one.

I guess I know now that I shouldn’t be kicking tires or climbing in and out of the back of trucks in one. Hell, even if I do get to town before the bank closes, I look like a ragamuffin instead of a lady.

Tears burned in the back of her eyes, but she refused to allow them to fall. She didn’t have time for them, and they wouldn’t help anything anyway. There was nothing for it. She would have to start walking back toward the Causey’s house and hope someone was there who could give her a ride to town.

Just as she started getting to her feet, another ratty old Ford truck pulled off the road in front of her. When the dust settled, she’d gotten up, and the driver’s door to the other truck had opened. One long, booted leg slid out, followed by the rest of its owner. The man had to be six two and weigh close to two sixty. He was built more like a linebacker than a rancher, but his strut as he walked back toward where she stood was all cowboy. He even had a slight bow in his legs.

The worn leather boots looked to be well broken in, much like the beat up blue Ford he’d slid out of. The jeans weren’t in much better shape with torn places over both knees and worn spots at the base of both pockets where keys, tools, and spare parts usually ended up by the end of the day. She bet that if she could see his ass, there would be a worn spot where he wore his wallet, and if he dipped, the Skoal would be outlined as a white ring on the opposite pocket. Sierra didn’t miss the whitened area at his crotch, but she was too much of a lady to think on it overly much.

Oh, hell, who am I kidding? I checked it out even before I bothered to look at the rest of him. I might be about to humiliate myself, but I’m not dead.

She finally forced her gaze north to see that the rest of him wasn’t half bad either. Broad shoulders rested on top of an equally wide chest, but other than a strong square chin, Sierra couldn’t see the rest of his face with the sun in her eyes and the hat pulled down low on his face. She did know that she’d never seen his truck before and doubted she’d seen the man either, just from what little she could see. Having grown up in the little community of Sagebrush outside of Riverbend, Texas, she prided herself on knowing pretty much everyone within twenty-five miles. She would have recognized that walk if the man had been from the area. She didn’t, so he wasn’t.

“You okay, ma’am?” the man asked in a soft, deep Texas drawl.

“Yes, thanks. Flat tire, but the spare’s flat, too,” she explained.

The stranger just nodded and turned to look back at the front tire. When he bent down to look at it, she wondered what he was doing. Then he ran a hand around it and down the back as well. He grunted and shook his head before standing up again.

“What? Someone deliberately cut my tire?” she asked with a gasp.

“Looks that way.” When she walked over to check the tire herself, he stopped her with a hand out.

“Don’t dirty up your pretty dress crawling around on the ground. When you get it changed, they can show you. Are you needing to be somewhere?” he asked when she stopped in her tracks.

“Um, yes. I’m supposed to be at the bank in Riverbend.” She checked her watch and sighed. Even if she left right now, she’d end up being late.

“You can hitch a ride with me. Once we get to town, you can arrange to have someone bring out a tire and change it for you,” the stranger suggested.

“Thanks. I’d appreciate the ride.” She walked back and opened the door of the truck to grab her satchel. “You must be new around here. I don’t believe I’ve seen you before.”

He chuckled before guiding her by the elbow over to his truck. When he opened the door and helped her in, she was surprised to find the inside just as clean as hers was. If one of her brothers used the truck for the day, it would be full of food wrappers and empty cans. She’d never met a man who kept a clean truck.

Probably isn’t even his in the first place.

Thorne dropped her on the bed with a bounce then set to work on removing her jeans. Rollan climbed on the bed and attacked her breasts once more, but had lost his shirt somewhere on the way to the bedroom. She welcomed him with open arms, eager to touch him. She loved how his hot skin felt over the hardened muscles of his arms and shoulders. They weren’t created in a gym somewhere. These were home grown and the result of long, hard hours out in the sun. She could appreciate them so much more since she’d labored trying to keep her ranch going.

The feel of callused hands on her thighs surprised her. She hadn’t even realized that Thorne had managed to remove her jeans already. She hadn’t even noticed when he’d pulled off her boots. Rollan’s hot chest, arms, and shoulders had her totally mesmerized.

“Spread these sweet thighs for me, baby. I want to see that pretty pussy,” Thorne told her. “Aw, hell, Rollan. She has the softest curls down here, and she trims it. I like how everything below that clit is bare for us.”

“Please, Thorne. Touch me,” she cried out as Rollan sucked hard on one of her nipples while pinching the other one.

In the back of her mind, she worried that she’d just jumped head-on into something she wasn’t ready for, but the way they made her feel soon drowned out the warnings. She wasn’t going to let her brain talk her out of this. They said they cared about her and wanted her for her, not for her land. They were already getting that. Why would they seduce her unless they truly did want her?

Thorne gently spread her pussy lips and the feel of his hot breath against her wet flesh sent chills down her spine. He slid his tongue from her slit up to circle her clit and hummed against the swollen bud.

“Damn you taste good,” he said.

“Oh, God, that feels so good,” she groaned. He licked her pussy, drawing the wet lips into his mouth to suck on before starting all over again.

The more he licked, the more her cunt ached to be filled. It felt so damn good, but she needed more of them. She wanted to see them and taste them as well. Sierra wanted them to fill her with their cocks and fuck her into next week. She’d gone without everything for so long that now that it was within her reach, she wanted it all and she wanted it now.

“What, baby? What do you want?” he asked as he stabbed her pussy with his stiffened tongue.

“Aw, honey. We’re going to take good care of you. Relax and feel how good it can be,” Rollan said before nipping the side of her breast.

“Is this what you want, Sierra?” Thorne asked as he slid one finger deep into her pussy.

He chuckled before adding a second digit and thrust both of them in and out of her cunt, varying the speed and depth until she wanted to scream with frustration. She wanted to come, but she wanted them inside of her, too.

“Look at her face, Thorne. She’s all pink and her mouth is open, just begging for a dick to suck on,” Rollan said in a raspy voice. “Hell, I want to fuck her tits and her mouth. I don’t know what to do first.”

Thorne’s deep laugh vibrated along her pussy, sending sparks deep into her core. Sierra wiggled, trying to get more friction from his fingers as he pumped them in and out of her sopping-wet slit. She was about to beg him to fuck her again when he did something with those nifty fingers that curled them in just the right spot to rub over her sweet spot.

Her loud moan had both men groaning with her as she bucked beneath them. The pleasure building with each stroke of Thorne’s fingers and twist of Rollan’s on her nipples promised to be more than she’d ever felt before. Sierra raced toward it, eager to find out just how hard she could come and how high she could fly.

Thorne seemed to pick up on the urgency as his strokes grew faster and his tongue rasped over her clit in tighter and tighter circles. When he curled his fingers deep in her cunt and stroked that special place while sucking hard on her clit, Sierra screamed as wave after wave of ecstasy poured over her in a warm wash that took her breath.

Rollan climbed off the bed as she floated down from the high they’d given her. She realized he’d completely undressed when he straddled her waist and his thick dick bobbed near her face. The spongy head looked almost purple and the thick shaft jerked as if it had a mind of its own.