Richter and Tanner meet again! Tanner has a hard time staying in the straight life and out of the street life, and ex-cop Sandy watches his friend with both sadness and lust. When a fire in Sandy's nature park rages out of control, Tanner has to step up and give more of himself than he anticipated. 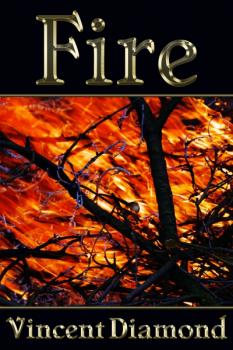 But then a shadow from beyond the screen door moved and Tanner stepped onto the porch: bare-chested, a towel around his waist and holding Marty. The black-and-white cat squirmed in Tanner’s grasp and jumped down the steps to greet Sandy.

“I thought the meeting would never end!” Sandy zipped up the stairs, Marty bounding beside him. Sandy stepped into the dimness of his cabin, and then Tanner grabbed him, slammed him against the wall, bruise hard, popping off the khaki uniform shirt like it was paper. Tanner pressed against him, mouth easing over Sandy’s short hair.

Sandy grasped Tanner’s face fiercely, and clung. His mouth was open before their lips even met. He felt Tanner’s warm hands on his shoulders, his back, around his waist, his butt, kneading and tugging. Moaning through their kisses, Sandy was unwilling to break apart.

Sandy could hear everything. Tanner’s towel falling to the floor. His own heartbeat pounding in his ears. Tanner tugged him upward, lifting. A quick pull, and he was up, his legs wrapped around Tanner’s hips. Through his pants, he could feel Tanner’s cock, hot and moving against him.

Tanner backed him against the wall.

“Oh, Sandy, you ...” his words faded as he bent and nipped Sandy’s neck and shoulders. He trailed wet kisses up to Sandy’s ears.

Tanner stroked faster now, his gasps more stark. Sandy smelled soap on him, the drops of pre-come oozing out him. The eroticism of it made Sandy growl with excitement.

Tanner at him, harder now, the rough paneling on Sandy’s back scratching through his shirt, crushed against the wall. The clean smell of Tanner’s skin swirled around him. Tanner at him, mad as a stallion, beyond stopping, grunting, close now, oh, so close.

Christmas Nick for Everyone
Jaxx Steele
In Shelf
$2.99
Tweets by
sirenbookstrand