Noah Lipinski has a fierce crush on Doug Hathaway, a hot jock on the high school football team whose locker is fifteen down from Noah's in the hall. When Melissa Bradshaw, only the most popular girl in school, suddenly shows an interest in Noah, he suspects he's being set up for a cruel joke. She asks him to Homecoming and he refuses to go.

After school, the doorbell rings and Noah's sure she's back to pester him about the dance. But when he opens the door, he finds Doug there instead, with an explanation and a much better offer than Melissa's.

Heat Rating: Sweet
Word Count: 2,272
7 Ratings (4.3)
Gay/Lesbian Young Adult
In Bookshelf
In Cart
In Wish List
Available formats
ePub
HTML
Mobi
PDF
Cover Art by Written Ink Designs
Reviews
An okay story...it was a bit too short to get to know and like the characters but it was a sweet read.
H.B.
Super sweet little story.
Jilrene
Read more...
Excerpt

Melissa giggles again, a distracting sound. She looks past him down the hall and Noah follows her gaze, but suddenly there’s no one between his locker and Doug’s. The jock stands at his locker, rummaging through notebooks as he looks for something. God, that hair!

Noah feels the urge to sigh, but Melissa’s right beside him, remember? He presses his lips together and frowns into his own locker, the skin on the back of his neck hot. “Go away,” he growls at Melissa.

She’s still looking past him, and from the corner of his eye, Noah sees Doug glance their way. Sweat beads on his neck, dampens the back of his head. Melissa gives a little wave that pisses Noah off.

When he realizes she isn’t leaving, he tries a different tactic. “What do you want?”

Her smile cranks up a notch. “I want to know when you plan on asking me to the Homecoming dance.”

“I --” Noah starts, then her words sink in. Confusion replaces his irritation. Why would he ask her? More importantly, why would she go with him? “What?”

“It’s only three weeks away,” Melissa says. She speaks matter-of-factly, as if they’re going steady and she wants to know what time he plans to pick her up, because she already knows he’s going to ask her out and she’s going to say yes.. “I know you haven’t asked anyone yet. So why --”

“Because I’m not going.” Noah shakes his head in disbelief.

“No-ah,” she says with a breathless laugh.

“Is this some kind of joke?” he wants to know. She can’t be serious. “Why me? You’re just wasting your time.”

Noah looks around and sees they’ve attracted a crowd; worse, Doug is still at his locker, watching this. Watching him.

Melissa continues. “I have a dress all picked out but we have to match. What color are you going to wear?”

Someone laughs but Noah doesn’t think this is very funny. Even Melissa’s grinning, the little bitch. I get it, he thinks, the back of his neck now burning with embarrassment. This is some sick joke. Let’s pick on the homo -- get the most popular girl in school to ask him out then laugh when he says no. And hey, while you’re at it, let’s do it in the hall between classes where everyone and their brother can see, including the hot jock the geeky queer creams over.

Angry, he slams his locker shut and shrugs Melissa’s hand off his arm. “I’m not taking you to the dance.”

He storms off, elbowing his way through the crowd amid catcalls and giggles. It’s not until he reaches his classroom that Noah realizes Doug’s signature laugh wasn’t among those following him down the hall.

Somehow he makes it through the rest of the day without running into Melissa again. But word gets around his school easily and by his last class, Noah’s had two more girls ask him to the dance. What, just because Melissa’s noticed he’s alive, everyone else clues in now, too? 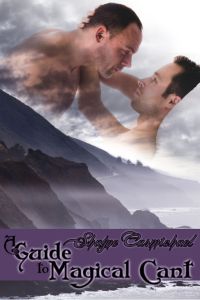 A Guide to Magical Cant
Shayne Carmichael
In Shelf
$4.99

Just Like in the Movies (MM)
Clare London
In Shelf
$0.00
Tweets by
sirenbookstrand