Against the unforgiving landscape of Alaska, Sharon Wolf, a single mother, struggles to reclaim her life from alcohol abuse and regain the custody of her daughter. But first she must overcome dwindling funds and find a place to live before the harsh winter sets in. She gets a job as a fry cook in a backcountry bar, aptly named The Nowhere, and begins to reconstruct her life. Her struggles are further complicated when she is stalked by a murderer who thinks she witnessed him kill an associate of his. In order to get her life back on track and regain custody of her daughter, Sharon must call upon her inner strength and learn to accept help from unexpected sources. Ultimately she learns to trust herself when the murderer kidnaps her daughter and Sharon finds herself in a life and death struggle. 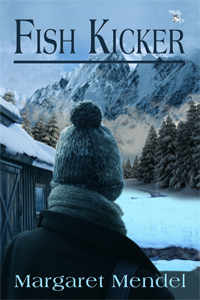 Sharon’s official job title was Fish Kicker. She was hired to kick, push and shove the fish off the truck beds and into the waiting crates. She’d gotten pretty good at it. Her stout, muscular legs gave her an advantage as she walked atop a pile of salmon. Being on the short side with a lower center of gravity had its advantage, too. A taller person would have had difficulty balancing as she scrambled over the slippery mess, but Sharon quickly got the cargo moving. And her arms were as strong as any man’s after all the years she’d spent chopping wood and hunting with her father and brothers. She’d gotten even stronger when she’d worked as a cook and river guide rowing the rafts up and down the Kenai River maneuvering the white water rapids.

She scrambled across the load of salmon and quickly removed most of the fish from the bed of the truck into the cargo boxes. When there was no longer the natural slime of other dead fish to easily move the creatures Sharon resorted to kicking the individual fish into the crate. By this point, the fish were no worse off for the treatment. Once they got as far as the Cook Inlet, most salmon had already been roughed up by their ocean voyage. The salmon were a windfall for the Beluga, seals and other large predatory feeders in the waters along the Alaskan coast and it wasn’t unusual to see a salmon with a missing tail, a fin snipped off or even a bite taken out of the belly.

Sharon jumped out of the empty bed of the pick-up truck just as the local sheriff’s car pull into the driveway. The sheriff had been around plenty this season and no matter what the weather, he wore a pair of ridiculous sunglasses, the kind with rainbow mirror lenses. Sharon never trusted people who lived with their eyes hidden.

“How you doing, Willie?” the sheriff asked.

“Can't complain. What’s going on Allen? You come by to get some fish?”

“No. Just checking with places along the inlet to see if anyone saw something out of the ordinary in the last couple of days.” Sheriff Allen peered into the crate of salmon sitting at the entrance to the weigh station. “Fishy smelling place, ain’t it?” The sheriff looked at Sharon. “You this year’s fish kicker?”

“Yep,” Sharon replied. It sounded more like she’d taken a bite out of the air than actually commented. He’d seen her plenty this summer but he’d never paid her any attention until today.

“Where you from?” he asked.

Sharon heard the suspicion in his voice. She shrugged her shoulders. “Up north.”

Sheriff Allen cleared this throat and took off his sunglasses. Large puffy circles hung beneath his charcoal black eyes.

“One of the fish nets pulled up more than fish early this morning,” the sheriff said. “Someone caught a dead guy. The crabs and sea lice got to him before he was snagged by the fishnet, but it was the bullet holes that made us take notice.” Sheriff Allen paused for a moment, probably waiting for a response. Then he continued, “You hear about any trouble in the area?”

“Sorry, can’t help you out, Allen. Only one other load besides this on came in today. Haven’t heard anything about a dead guy.”

“How about you, fish kicker,” the sheriff said. “You see anything suspicious?”

“If I did, you’d be the first one I’d tell,” Sharon said. She grabbed up a garden hose, turned on the spigot and washed the slime from her boots.