Flight of the Hunted

Never judge a bird by his feathers.

As a hunter of paranormal creatures, Clora has encountered many kinds of shapeshifters, but Kale is like nothing she has ever come across before. He's a crow shifter and is convinced that she is supposed to be his mate—something which she finds both terrifying and exciting.

However, Kale's flock disapproves of his plan to mate with a human, and when they intervene, kidnapping him, Clora is left to wonder if he's worth hunting across the country, and if it's worth risking her life for a future they may never have. 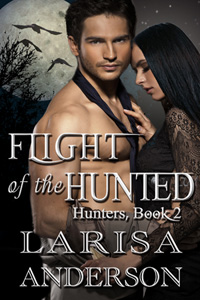 Flight of the Hunted

More From The Hunters Series 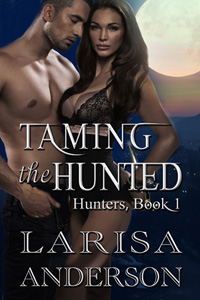 Hesitantly, Clora removed her foot from the brake and applied pressure to the accelerator, taking them back onto the road. She could see him out of the corner of her eye. His gaze darted around their surroundings, but his body remained rigid and unflinching. She gripped the cool metal of the Glock like a security blanket. He didn't seem to want to harm her. Perhaps he was as curious about her as she was him.

Finally, they arrived at her building. She hurried him up to her apartment, her small hand grasped his over large one. His skin was soft, not what she expected of a shifter. They spent days on all fours and usually developed calloused palms to cope with the strain. Everything about the man was soft and clean. His dark hair hung over his face and around his ears, glossy and smooth as he ran a hand through it. He liked hair too it seemed. As she pulled him behind her up the stairs, he kept running his hand through her hair almost absently.

"Stop that," she scolded as they finally reached her front door. The gesture was nice, she hadn't been groomed for some years. She guessed that was what it was after all, grooming. Even human males groomed their mates to some degree.

Right now, she had to focus on the matter at hand. She had just brought a strange man home with no knowledge of his name, intentions, or even species. She was a fool, but a fool in deep curiosity about the man now padding silently and with perfect balance across the room. For such a large man, she would expect him to make more noise, or any noise.