The Space Commission hot on her trail. French spies and flying kites.

For Dr. Sally Pescan, this can’t be good. 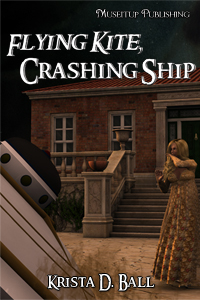 Amanda did not notice the lady until she touched the smooth metal of the flying kite’s hull. It was obvious the female occupant had noticed her presence, as she began shouting at a gentleman who arrived from the floor hatch. The thick metal skewed their language, but Amanda recognized it as an ancient dialect of French.

“Hello?” Amanda tapped on the window. The occupants stared at her wide-eyed for several seconds before they resumed yelling at each other. They stepped away from the windows and their words became unintelligible.

“Colonel, you must come see,” she urged. “There is a French lady inside, with a man. I assume it’s either her husband or brother, by the liberties she was taking with her speech. And look, she is wearing trousers. How scandalous!” She had never seen a woman in trousers before.
“French!” Colonel Lindsay paled. He pointed at the maidservant standing off to one-side. “Girl, fetch the militia at once! The French have invaded Devonshire!”