Rancher Calhoun Cordell and businessman Daniel Patterson have struggled for almost two years as a couple, with careers and goals often in conflict. A tragic fire, leading to a traumatized valuable breeding mare, has Calhoun sending for a well-known horse whisperer. Except the man is dead. His daughter, Ruby McMurtry, shows up for the job instead and complicates their lives even more. What do a rancher, a CEO, and a horse therapist have in common? More than any of them can imagine.

He pulled open the over-sized front door and gaped at the bit of a woman shivering on the porch. She appeared a foot shorter than him and a good sixty or more pounds lighter. What hit him most were her eyes—an odd dark green, like jade or something. Her eyes narrowed as he looked her over.

Finally, she stretched to her full minimal height and bristled at him. “When you’re done checking me out, do you think you could let me inside? It’s colder than cold out here.”

Daniel stepped beside him and intervened. “Let the lady in, Cal.” He looked around her and asked, “Where’s your car? Assuming you drove here.”

She slid between them into the tiled foyer before turning back. “No car. And I didn’t drive here, at least not exactly.” Her teeth chattered.

Calhoun closed the door against the sharp winter breeze and watched her pull off a battered pink Stetson, unveiling chin-length strawberry-blonde hair. “What does ‘not exactly’ mean?” He added, “Who are you, anyway?”

She worried her trembling lower lip and glanced from him to Daniel and back. She pulled off a glove and stuck out her hand. “Ruby McMurtry.”

Instead of taking her hand, he puffed up in annoyance. “You’re late! Where’s your father?”

She started to lower her hand, glowering at him. But he noticed something besides anger in the depths of those enchanting eyes. He couldn’t get a handle on the emotion.

While he tried to calm down, wishing he hadn’t jumped on her, Daniel reached out and shook her very red-looking hand.

“You feel like ice,” he said in concern. He took a second to scowl at him.

As she blinked at her hand sandwiched between Daniel’s, her already pink-chilled cheeks turned pinker. “I should’ve worn my thicker gloves,” she muttered in clear discomfort. When she managed to slip free, she glared at him.

A twinge of guilt about his rude behavior passed through him, but his anger came out first as he repeated himself. “Where’s your father? I have a serious bone to pick with him.”
Those eyes that still captivated him welled up with tears. His gut tightened.

Her lower lip wobbled and she sputtered, “He…he…he’s dead.” 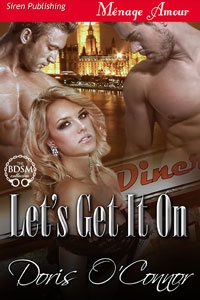