Forever Across the Stars

Femwar Feather Ravoko has won her final battle, but her trainer, Irikii Drader, refuses to claim her, as is his right. Hurt and confused, she chooses Elatia, the famed pleasure planet, for her furlough. There, she discovers the cruel twist to her prize. Welcomed by fellow czwars, she struggles with her emotions and lack of purpose, but her one comfort is Ymien, a male Adamo who begins his seduction of her. Irikii gives up everything to follow Feather across the stars, but when he’s enslaved by Cezzmots, he finds himself thrown into a plot to conquer Elatia. Fearing for Feather and the Elatian people, Irikii wins the commander’s trust and forms a plan to thwart him—a plan that might end Irikii’s life. Wooed by Ymien and pining for Irikii, Feather must fight her feelings for both men, but when an explosion lights up the city skyline, she’s thrust into a battle of life and love. 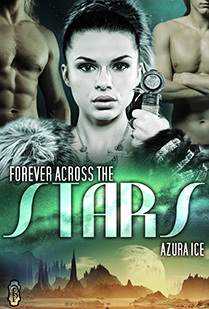 Forever Across the Stars

Ymien held his hands out to help Feather slip down from the bird’s back.

She hesitated. Beyond sparring and real one-on-one battles, no man except for Irikii had ever touched her. With her wrapped treat in one hand, she slowly swung one leg over the animal’s back and let herself slide toward the man. He caught her by the waist, his copper-colored hands warm, strong. Gently, he lowered her to the ground. Their gazes locked. A tight feeling settled in Feather’s loins. Uncertain, she stepped away from Ymien.

“Thank you,” she said, “but I am quite capable of dismounting on my own.”

“I did not mean to offend. Courtesy is part of respecting another.”

“It’s fine.” Confused by his kindness, she spun on her heel and hurried after Dionna, who was almost to the garden gate.

“Come, matishma,” Dionna called, waving for her to hurry. “We will introduce you to my two czwar companions.”

Feather walked briskly along the footpath, desperate to put some distance between herself and the handsome man following her. She lost her footing in the slick pebbles and skidded, but a strong, firm grasp landed on her upper arm. Feather glanced up to find Ymien steadying her. Flustered even more, she offered him a polite smile and pulled away, her pride prickling.

She passed through the ornate gate. In the center of the garden, a spring burbled into a small pond, and three large, white benches sat near its edges. Beneath the water’s clear surface, several bright yellow and sapphire fish zipped around the rocks and chunks of minnica.

“Ah, I see sparks leaping between the two of you,” Dionna stated. She settled herself on one of the benches as two other czwars and a helper ambled toward them along the opposite path from the house. “Feather is a comely sight to behold, is she not, Ymien?”

“She is spectacular.” He nodded. “Her pale skin, dark eyes, and hair as black as space itself are very eye-catching.”

Startled, Feather shot the man a wary look. No one had ever given her such trivial praise. He grinned back at her, and her body heated in response.

“There are no sparks between us unless they come from a blade,” she snapped. “I have no use for a man.”

At that, Dionna burst out laughing, the sound bold and loud. “Oh, but you will, Feather, you will. Desire is often the strongest force in the universe.”