Linus Murray is head over heels in love with Samson Abbot. The only problem is that Linus would love to make things official while Samson seems afraid to make the ultimate commitment. When Linus's sister lands in the hospital, he breaks his own heart and decides it's time to break off things with Samson.

Samson is caught by surprise and none too happy with the turn of events. But how can he get Linus back in time for Valentine's Day without doing something cliched, which he knows his beloved dislikes? 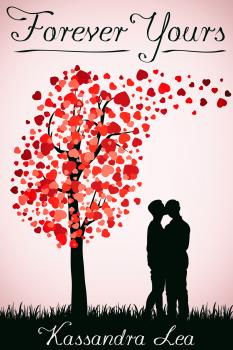 The engine ticked as it cooled, the radio whispering the weather report, driving home the warning about the impending storm. Samson eyes the massive hospital from the cooling interior of his SUV. Was he making a foolish mistake by coming here? Should he have just stayed home or tried to meet up with one of his friends? Perhaps. However, at the same time he wanted to keep quiet the current state of his relationship, not quite ready to break the news to his mom or his brother or anyone else.

Samson continued to cling to hope.

“So yeah, maybe I am a fool,” he sighed, slumping back against the seat.

Over the last three days he tried to act like everything was normal, the lack of Linus explained away by a fake business trip. Not that Linus ever took business trips, unless it was to accompany him, and he barely managed to convince himself of the phony story.

The ache in his chest proved to be unrelenting.

Just like everyone else, Samson had had his heart broken before, it came with the trials and errors of trying to find the right one. The so-called perfect match. A soulmate. This pain, however, was unlike any he'd experienced before. By now, following his previous breakups, he should have hit the point where he picked himself up, dusted off the heartache, and resumed living his life.

So when he woke up that morning he tried doing exactly that.

The proposal, if he wanted his firm to get the job, needed to be done by the end of February. Easy enough. Normally. Unfortunately, at one point he discovered he wrote Linus’s name instead of the word he'd meant to, which didn’t even start with L. It was then that he threw down his pencil and ruler and stormed out of the room.

Talking, he wanted to talk.

So he settled on a trip to the hospital because if there was one person he trusted when it came to the details of his relationship with Linus, it was Marnie. Of course, being out of touch with Linus, Marnie’s current condition was a mystery to him. Still, even if he wound up doing all the talking Samson figured speaking his worries and doubts out loud to another human being would be enough to provide the sought after clarity.

Besides, chances were he'd hear her voice in his head, having spent plenty of time discussing matters of the heart with his beloved’s older sister.

Samson tucked the keys in his jacket pocket and headed for the entrance. Little red hearts dotted the glass panels of the entryway doors and more hearts, these ones cut out of paper, decorated the admittance area, each one baring the name of a child. He knew from previous visits to the hospital that children in with serious illnesses were often asked if they wanted to dress up the hospital for whichever holiday was coming down the pipeline. He quite liked the little bit of cheer it brought to the otherwise sterile and cold building.

A quick stop at the desk to talk with the secretary and Samson was on his way up, surprised, and pleased, to learn Marnie’s condition was stable enough they moved her from the ICU.