For some people ghosts are everywhere...

When rebuilding an old ghost town, a few ghosts shouldn’t be a surprise. And for Jen Ferguson, history professor and psychic, it’s par for the course. But ghosts aren’t her main worry.

After a disastrous affair, which has affected her job at the college, Jen promised her grandfather—the most important person in her life—that she would stay away from men until the end of the semester. That’s a promise she’s determined to keep, but when she meets rancher Adam Craine, it becomes a struggle. Adam’s sexy and flirty, and her psychic abilities are telling her that he might possess a very important quality the previous men in her life had been lacking…he can be trusted.

It’s a daily battle for Jen to keep her hands off of him, but she believes she can do it…until two of Winter Creek’s ghostly residents decide to up the stakes by possessing Jen and Adam’s bodies. How can Jen keep her promise with these two passionate spirits interfering?

And if all that’s not enough to deal with, now she’s having premonitions of danger which could lead to the destruction of Winter Creek. 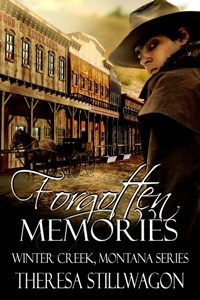 "If you like ghosts, romance, mystery and snippets of the old west, then Forgotten Memories is for you." Stacey at Sizzling Hot Book Reviews

"Interesting western that includes a little psychic ability and a little ghostly action and a sweet romantic story about two scared hearts looking to heal with a little help from two ghostly relatives." Roni at Romance Book Scene

"Theresa Stillwagon creates a memorable story within the pages. The characters are great and the pacing just keeps getting more intense. I'd suggest not missing this novel." Nikki at Siren Book Reviews 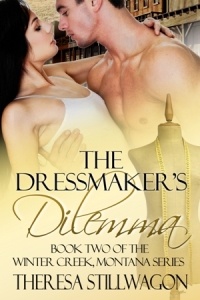 “Close your eyes. I’m going to walk you behind the folding wall and place you in front of the mirror. Keep your eyes closed.”

“Are your eyes closed?”

She laughed softly but did as Barb asked of her. Every dress this talented seamstress designed for her was always shown off in the same way. “Yes.”

A moment later a soft hand encircled the top of her left arm while another hand landed lightly against her back. She allowed her friend to press her toward the small cramped area opposite her office desk and chair. A frozen touch slowly replaced the warmth of her friend’s hand, and a hint of flowery perfume replaced the scent of her friend’s earthier one. Honeysuckle flowed into the air around her a second later, a breeze of chilled wind moving past her skin into her interior being, making her dizzy with the aching familiarity of it. As she moved through the scent, closer to the old-fashioned Chinese wall, a strange iciness settled deep in her bones, freezing her feet to the floor.

She’d felt this profound, unnatural chill a few times before.

The strangeness deepened in her, and she brought her arms up to wrap them tightly around her upper body. “I’m freezing.”

“It’s not cold in…” Barb’s hand dropped from her back but not from her arm. “Oh, it’s that kind of cold.”

“My little saloon girl is visiting with me again.”

Barb’s words seemed to come from a great distance as the cold around Jen intensified.

“I’ve been telling you that for weeks,” Barb added. “What changed your mind?”

“She’s a ghost that haunts a saloon.”

“Yeah,” Barb said. “You’ve always known that, but it never convinced you before.”

Icy tentacles suddenly wrapped around Jen, like a frozen pair of snow-hardened gloves, before an eerie voice whispered, “He’s coming.”

“What?” Opening her eyes at the barely heard sound, Jen stared at her puzzled friend. “Did you just say something?”

“Tell me you just said something under your breath.”

The prickly eeriness left her system as quickly as it’d entered, bringing blessed feeling back into her freezing, stilled body. The hint of honeysuckle perfume lingered for only a few seconds before dissipating in the October Montana air.

“Please tell me you heard a woman’s voice just now.”

“Are you telling me she actually talked to you?” Disbelief registered clear in Barb’s wide, dark eyes. “All mine ever does is mess with my stuff.”

“I’ve never heard her speak before.” Jen frowned. “Maybe it was my imagination.”

“So what did your imagination say to you?”