Legend tells of Fortunatus, who had a magical purse, a never-empty purse; if gold was spent from it, the purse would refill itself. Now, somehow, this "never-empty" property had been magically bestowed upon two small wooden cabinets which hung on the wall of the antique shop where Peggy Cassidy had been working since she was expelled from college for cheating. It was only when a customer attempted to defraud the store on the price of one of these cabinets by using magic that Peggy's aunt revealed to her that she—Peggy—was a witch, and set Peggy to work learning her craft.

A gunman attempted to steal the other Fortunatus cabinet, and a gun battle with a police officer took place, seriously wounding the officer. Peggy saved the policeman's life with her rapidly developing magic skills, and then fell in love with him. When it was discovered that the gunman had been a warlock, Peggy, her aunt, and the local coven had to band together and declare war on the warlocks, in order to solve the puzzle of the Fortunatus cabinets. 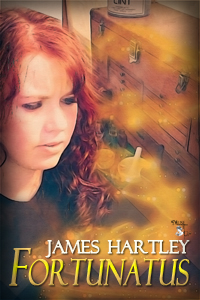 Five or ten minutes passed. The door opened again, but this time it was slammed back against its stop. The man who entered was short and ugly. Frazzled, bushy hair of a nondescript color, unshaven, crooked teeth, and wearing ragged and dirty clothes. This time, instead of dropping my book, I closed it on a bookmark and slipped it onto a little shelf under the counter. Why? Just a hunch, but that had been in chapter four, "Never Ignore a Hunch." I said, "May I help you?"

He pointed at the small wooden cabinet on a shelf behind me and said, "I want that cabinet, and the other one, too. Now!"

I knew what he was talking about without even looking. I also knew it was marked NFS, Not For Sale. And I knew the other cabinet, the almost identical one that had been sitting next to it from the time I started working in the store, had been sold several weeks back for the amazing price of $1100.

"Sorry, sir," I said. "That item is not for sale, and the one like it has already been sold."

He let out a noise somewhere between a growl and a scream, loud enough to attract the attention of Minnie and Magnus. Then he reached in his pocket and pulled out a gun.

There were several easy-to-reach 911 panic buttons under the counter and I stepped on one, down where he couldn't see me do it. There was no sound in the store, but plenty in the nearest police station and in the nearest fire station with an EMT truck. Then I said, "Sorry, sir, I can't help you." From the corner of my eye I could see that Minnie and Magnus had gotten up and were coming over. "Perhaps you'd like to talk to the owner of the store?" I wasn't sure what to do, but maybe Minnie did. And anyway, delay seemed to be an admirable tactic at this point.

The gunman was obviously very upset. "The cabinets, the Fortunatus cabinets, I want them. Or else!"

Fortunatus cabinets? The legendary Never-empty Purse of Fortunatus had been covered in chapter five of my book. Apparently someone had worked out a similar spell for those cabinets. No damn wonder somebody was willing to pay $1100 for one of them.

At this point Minnie stepped up to the counter and said to the man, "Can I help you?"

The gunman was waving his weapon around wildly, not aiming at anything in particular. "The Fortunatus cabinets," he repeated, louder than before, so loudly in fact that some china on a nearby shelf rattled. "I want them!"

"I'm sorry, but one of them was sold. And the remaining one is not for sale. It's my personal property, not part of the store's inventory."

"I don't give a damn if it belongs to Satan himself, I want it." Now he was pointing the gun in the general direction of Minnie, Magnus, and me, but still couldn't seem to decide on a target.

From where we stood we could see the door, still open from his entrance, only there was a cop in it now. Plainclothes, but his badge was visible hanging from his belt. He was in shooting stance, but holding his fire. I had watched enough TV shows to realize that he was worried about a near miss, or a bullet going right through the thug, hitting one of us. He was waiting for a clear shot.

I don't know how long this would have gone on, but there was some kind of noise in the street and the gunman spun around, saw the cop, and fired. But Aunt Minnie had been ready, she blew some dust in his face that partly blinded him, so his aim was not very good. He got off two shots, hitting the cop in the shoulder, just above the edge of his Kevlar vest, and in the thigh. The cop only got off one shot, but it was straight to the heart. Both of them dropped to the floor. The gunman's chest was fountaining blood, it was obvious he would bleed out in mere seconds. The cop was bleeding too, but nowhere near as badly.