When Jeremy, a high-profile photographer, agrees to take on Alan, the most popular male underwear model in the business, things are bound to develop. After their first freelance gig in Morocco, they spend a drunken night together. Was it more than a one-nighter for one of them?

Six months later they find themselves in Provincetown. While there, Alan meets Dylan, an adoring young fan who ends up getting the night of his life in Alan’s bedroom.

Unable to control his jealousy, Jeremy takes matters into his own hands and plays a risky game to get rid of Dylan. Will his plan backfire, destroying their working relationship as well as any hope for love? Or can Jeremy and Alan admit there was more to their one night stand than they are willing to admit? 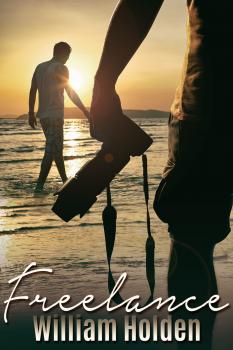 “Where are we going? Shouldn’t we wait for Alan?”

“Why don’t we go back to your place? We can wait for him there.” He patted Dylan’s back and winked at him. “Besides, your place is on the way to the morning location. It will give us a chance to get to know each other.”

“How do you know where I’m staying?”

“I ... just assumed based on the direction I saw you coming from that you were staying on the East end of town. Let’s head down to Commercial Street and walk the strip this morning.”

“Sure, let me text Alan to let him know that we’re waiting for him at my place.” Dylan pulled out his phone.

“That’s a good idea. You do that.” Jeremy continued to walk with his arm around Dylan’s shoulder. “It sounded like the two of you had a great time last night.” He noticed the stunned look on Dylan’s face. “Don’t look so surprised, Alan’s bed is right above mine.”

“Sorry about that.” Dylan’s face became red. “Can we stop and get some coffee?” Dylan stopped in front of Wired Puppy.”

“Sure, and why don’t you get a large one to take with us for Alan. He’ll appreciate the gesture.” Jeremy pulled out his wallet.

“Latte would be great, thanks. Are you far from here?”

“No, just down to the next street and then left.” He pointed over the rooftops. “I’m right there. On the third floor.”

“You must have a great view.”

“I’ll wait here.” Jeremy nodded to the bench in front of the shop’s window and watched as Dylan entered. The smell of coffee drifted out the door and stung Jeremy’s nose. He turned and watched Dylan standing in line. He shook his head. I can’t believe I’m doing this? He reached into his coat pocket and felt Dylan’s camera. He took it out and flipped through the images of Alan. Damn you, Alan. You stole my heart six months ago and won’t give it back. He put the camera away then closed his eyes. Just tell Alan the truth. You love him. “No, I can’t,” he said. Two men walking by looked at Jeremy talking to himself. They smiled and nodded. I can’t. You heard Alan. It was nothing more than a fuck to him. I can’t chance ruining our professional relationship. “Damn it.”

“What’s wrong?” Dylan said as he came out of the shop.

“Nothing.” Jeremy stood and took his latte. “Thanks.” He raised the cup and took a sip. He sighed. “That’s what I’ve been missing.” He winked at Dylan. “Lead the way.” He smiled and followed Dylan down the street.

“Can I ask you something?” Dylan broke the uncomfortable silence that had fallen between them as they entered Dylan’s room.

“Why are you acting so nice toward me this morning? I got the impression last night at the bar that you didn’t like me being around Alan all that much.”

“Look, it’s nothing personal.” Jeremy took the brief moment that Dylan’s back was turned to place the camera on the small desk next to the laptop. “Alan and I have a lot invested together.” Jeremy continued as he walked to the other side of the room. “I have to protect that investment. I won’t let anything or anyone destroy what we’ve started.”