When Layla and Bernice first met, they'd never heard the word "transgender." Back then, they thought of themselves as cross-dressers and frequented gay clubs together.

Twenty years later, Layla is a glamorous and successful real estate agent living as a woman full-time. Repressed Bernice is still married to a woman who won't let go of the husband Bernice used to be. She spends her lonely nights dreaming of a life with lovely Layla.

While Bernice is trapped in a hopeless relationship, Layla seems perfectly content hopping from bed to bed. On Friday night, when their facades break down, will these long-time friends finally admit their love for one another?

And even if they do, how will married Bernice and swinging single Layla build a future together? 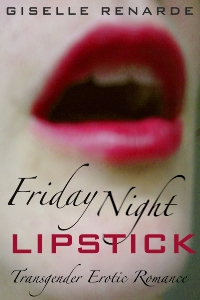 "There is a very real emotional connection there that adds significance to the physical coupling [...] I will refrain from saying anything further, for fear of spoiling the magic, but you know with Giselle that there is a happily ever after in the offering. The way in which she wraps up all the threads of the story is quite beautiful, and if you don't shed a tear or two of happiness before the end, it's likely only because you're exhausted from sharing in their pleasure."

There was nothing to say.

There was only the kiss.

For the first time in their twenty-year friendship, Bernice pressed her lips against Layla’s. Layla went one step further, parting Bernice’s teeth. Beyond its sheer strength, that tongue was warm and wet and soft as velvet.

Layla’s kisses matched the vivacity of her character, but there was a delicacy to every moment that Bernice hadn’t anticipated. Really, she never thought this day would come. She’d hoped to kiss Layla, dreamed of it, and now it was happening. Her unnamed wants all sprung to the surface, though she’d cast them aside in her hopeless hours. In the passion and tenderness of this kiss, Bernice saw her future. And it was beautiful.

As they stumbled to Rosanna’s sofa, Bernice peeled the straps from Layla’s shoulders, letting her skimpy dress fall to her waist. Without waiting, without asking permission, Bernice latched on to Layla’s beckoning breasts.

Layla gasped when Bernice pressing both tits together. She’d spent so many lonely nights dreaming of this in bed, dreaming of the woman she loved. She loved. She switched nipples and Layla writhed against her face, moaning, “Yes Bebe, yes doll.”

Bernice pressed her face to those beautiful breasts. Oh, they were so much softer than she’d imagined. She couldn’t control herself, running her tongue from nipple to nipple, licking, sucking, biting, making Layla squeal.

Hiking up her skirt, Layla hooked her thumbs around her black gaff. Bernice’s breath caught in her lungs. She backed off, giving the woman room to wriggle out of those tight-fitting undergarments. Her heart hammered as they slid down Layla’s thighs.

“What’s wrong, doll?” Layla’s copper dress hung over her crotch as she kicked off her underwear. Bernice looked into her eyes and found them full of concern. “If it’s too fast, or if you don’t want to…”

“No.” At her age, Bernice felt embarrassed admitting to her inexperience. “I’m nervous, if you can believe it. I’ve just… I’ve never done this before.”

With a loving chuckle, Layla leaned forward to plant a kiss on Bernice’s cheek. “You sound like a teenager.”

“I know.” Bernice smirked. “I guess that makes you a cradle-robber.”

But Layla hadn’t loved those other people. And she loved Bernice. That was the difference.

There was nothing to be afraid of.
***
Giselle Renarde is a queer Canadian, avid volunteer, and contributor to more than 100 short story anthologies, including Best Women's Erotica, Best Lesbian Erotica, Best Bondage Erotica, and Best Lesbian Romance. Ms Renarde has written dozens of juicy books, including Anonymous, Ondine, and Nanny State. Her book The Red Satin Collection won Best Transgender Romance in the 2012 Rainbow Awards. Giselle lives across from a park with two bilingual cats who sleep on her head. 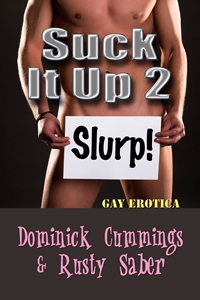 Suck It Up 2: Slurp! Gay Erotica
Dominick Cummings
In Shelf
$2.99
Tweets by
sirenbookstrand