From Boys to Men

After five boyfriends in two years, twenty-year-old blonde boy-toy Michael has indeed learned that he's looking for love in all the wrong places. All he wants is a true, honest, and monogamous boyfriend-something, he complains to Benji one sunny afternoon as they eat lunch in a Mexican restaurant, that seems impossible among guys his own age. Even Manuelo, their spicy, well-built young waiter at the lunch, is juicy enough to put on the menu…but Michael's having none of it. A side trip to the john brings Michael in touch, however, with a man over his twice his age, who's cooking in the restaurant kitchen-a slab of Latin beefcake with handsome, finely-chiseled features and the physique of a world-class bodybuilder. When Michael learns that the forty-eight-year-old god, Rudolfo, is Manuelo's father (and the restaurant owner) Michael concocts a plan to seduce the straight (and very married) Latin stud later that night, after the restaurant is closed…if for no other reason than to prove to himself that a real man can indeed satisfy, in ways the "boys" he's been seeing lately have been sorely lacking. 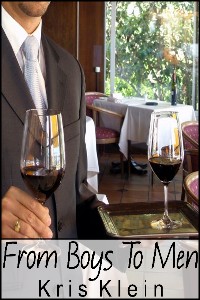 From Boys to Men

"The sex is raw and primal...It’s naughty, gritty and just a bit deviant—just the way I love it!"

"… 'From Boys to Men' is scorchingly hot and worth the read."

He was one of the cooks visible through the long, open window – the oldest, tallest, and best looking of the group. About six-foot tall, he was built like a Colt model–handsome, rugged as boot camp, and all muscle from the neck down–with thick, wavy black hair turning a bit gray at the temples, similar threads of silver-gray sprinkled throughout. Hispanic and oozing machismo from every pore, he was masculine and sexy and so well-built, the dark gray t-shirt he wore under his food-stained apron strained to hold in his muscular bulk, their seams stretched to capacity. I couldn’t see him from the waist down, the open window not being long enough, but could tell from where I stood he was v-shaped and health-conscious, and imagined that below the waist was only even more a masterpiece than what I saw now.

But it was, first and foremost, the face that had gotten me. Probably in his mid to late forties, the extra years had only served to make him more handsome–his big, dark-brown eyes still glittering with the youth and vitality of a man half his age. Square-jawed and with full lips God must have blessed him with just for kissing, even his thick black moustache–well-trimmed and also barely tinged with gray–only added to the intense sense of masculinity that rolled off him in waves, as he ran around preparing meals in the restaurant kitchen...smiling and laughing and calling out orders to the younger cooks in fluent, heavily-accented Spanish. Even his smile, like Manuelo’s, was a flawless, sexy, perfectly-even white. For a guy his age, he took better care of himself–looked better–than most of the young “hotties” I saw in the clubs today…so virile and sensual and beautiful an example of pure Hispanic manhood, I found my erection growing in my jeans even as I stood there, still rooted to the spot not too far from the men’s room door.

I spotted Manuelo coming toward me, heading toward the bathroom, and as I stepped aside to let him pass I grabbed his arm. “Excuse me, Manuelo,” I said, sort of gesturing toward the kitchen area. “Could you tell me who the guy is in the kitchen? The one in the gray t-shirt and apron?”

Manuelo stopped, turning his head to glance through the cutout window to where the cooks rushed around like crazy. His chest swelled with pride, posture straightening. “You mean the guy with the gray in his hair? That’s Rudolfo Chavez, owner of this restaurant. And, I am proud to say, my father.” 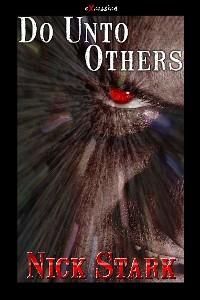 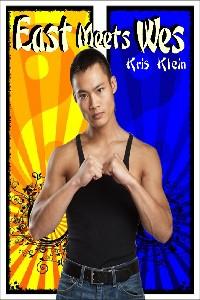 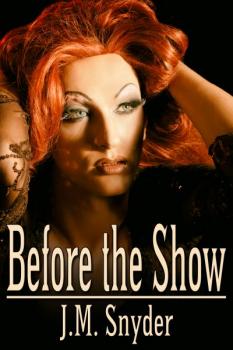 Before the Show (MM)
J.M. Snyder
In Shelf
$0.99
Tweets by
sirenbookstrand