After leaving the Mansion in search of her perfect Master, Jennifer Campbell finds herself instead in the cruel hands of a domineering Mistress, Rosemary. There is no sign of the man she thought she was coming to Jamaica to see, her lover, Lionel Aldridge. While forcing bondage, punishment, and sexual excesses on Jennifer, Rosemary tells her she will see Lionel again if she obeys perfectly. Unsure but with hope, Jennifer obeys and soon she is off on a globe trotting odyssey of submission and sex which will bring her close to a hellish fate. With little hope of escape and knowing she has made a terrible mistake, Jennifer prays fate will reach out and rescue her, but will it happen before it is too late. 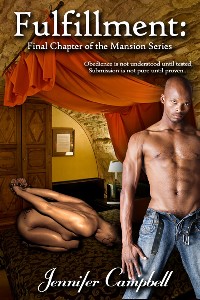 After a few strokes of the whip to insure my docile compliance to lie on my belly, she went to work binding me in a severe hogtie with my ankles, knees, and elbows and wrists bound together tightly by the black cord which bit into my tender skin. She incorporated the long two by two pole into my bondage by weaving the cord around my bent backward ankles and my elbows while the wooden pole was in between them. Rosemary then weaved some of the cord into my long raven hair and pulled my head back painfully connecting it to the pole where my elbows were bound. The effect of all this had me lying on my belly with my head, elbows, and ankles bent painfully behind and above me to join with the pole. I was helpless, my hands useless to me as I struggled.

“There, you can’t roll about like that and the baggage handlers will be able to easily carry you.”

It was then I realized the bizarre way I would leave this jet; bound and hanging to this stout pole like a dead animal as it was borne by two burly baggage handlers.

It wasn’t just my kinky imagination for when we landed I heard the plane’s door open and Rosemary called out. “Cantu, Regna, the baggage is in here for you. Handle it carefully, in the sense of not damaging it badly, but of course as usual you may take whatever liberties you chose to as a gratuity. Oh, and feel free to inspect the cargo for possible contraband. There are several orifices in which things could be hidden.”

To my utter amazement, two burly native baggage handlers boarded the plane and grinned at me picking me up by the bar my limbs and hair was attached to. The full burden of my weight which now hung from the bar and there was pain in my tendons and joints as they struggled to distribute the weight which was made worse my the two men swinging the bar casually as in the darkness of the Jamaican night they carried me down the ramp, across the tarmac, and into a large building. All the time, I felt like a spitted animal being lead to a roast as my naked breasts hung beneath me and were groped and fondled by the handler’s paw-like hands. Once we were inside the shelter of the building, they simply plopped me down on a table and removed my ball gag. In my mind there was no question of their intention and I took each of their hellishly large cocks in my mouth and got them off tasting their seed when I did. I knew this was perhaps the least of what I might face and I had little in the way of choice in the matter.

After their climax, they replaced my gag and placed me in the back of a small Jeep covering me with a blanket. I waited for what seemed like a long time and finally I heard the jeep door open followed shortly thereafter by the voice of control.

“All comfy, bitch? Well perhaps not, but slaves should not expect comfort, right?” Starting the engine, Rosemary began driving like a wild woman through what I assumed was Kingston’s crowded streets for I could hear street noises and cars honking at us. With the way she was driving I thought perhaps the police would stop her and discover me, but then I wondered if I wanted such a situation. Truthfully, I still did not know if she was working for Lionel as her refusal to tell me had left me in a way vulnerable. If I was rescued, taken from her, would I somehow be cutting my ties with Lionel? This uncertainty infuriated me, for I didn’t think Lionel would allow this, but then the question became more frightening and depressing. Do I really know Lionel Aldridge? Thankfully, I was not forced to confront this confusion directly as I never heard a police siren chasing us.

Soon we left the city, or so I assumed for the street noises decreased to an occasional passing car or the howl of an animal. There was of course the rapid beating of my heart which seemed all too noticeable to me in this tense situation. For a few moments I drifted to a better place remembering how I had been kidnapped before by Mr. Red and Mr. Blue to be taken to the Mansion for the very first time. Yet this kidnapping had been different as I had known before hand I would be taken and I had knelt dutifully naked and blindfolded on the front steps of my condo to await my mock kidnappers. Back then, I had known where I was going and pretty much what was expected of me from my new Master Keefe Murdoch, but such answers were a mystery to me in regards to Rosemary. I began to softly sob under the blanket my muscles sore from their enforced position. Where is Lionel and why has he forsaken me?

The bumpy jeep ride continued for hours and my body soon felt every turn and bump in the road before I saw the light of morning peeking through a small hole in blanket. Not long after, the vehicle stopped suddenly jarring my tightly bound body against the back wall of the jeep’s cargo compartment.

Suddenly the blanket was gone and I was left blinking and squinting at the bright sunlight as my eyes struggled to adjust to it. Rosemary grabbed my head and jerked it painfully to the side so I was forced to look on her brown-skinned face. “Home sweet home, bitch. Well maybe not so sweet for you, but slaves aren’t supposed to have fun.” She laughed as she began to untie me releasing first my hair, then my elbows, knees, and ankles from their tight connection with the pole. As I flexed my unused body parts I saw the deep bruised impression of the cord on my skin.

“Don’t be sad, pretty thing, they’ll heal.” Her voice contained an edge of resentment of my beauty.

Retraining the Sub
Jennifer Denys
In Shelf
$3.99
Tweets by
sirenbookstrand