Phoenix is hot but the bikers are even hotter and Samantha finds this out firsthand after partnering with her cousin to run Dr. Doug’s Mobile Dyno. Spurned by an ex-fiancé and resolved to taking care of her aging father, romance is the last thing Samantha’s looking for.

Along comes opportunity in the form of Linc Montgomery, a tough, business-savvy, ex-Harley racer and new owner of Full Throttle Custom Cycles in Phoenix. Linc is used to having gorgeous women fall at his feet. When he meets Samantha and agrees to contract her company, he quickly realizes she isn’t one of those brainless bimbos he normally dates.

The challenge is on for Linc as he sets out to seduce Samantha just to prove he can. He doesn’t plan on the interference of his ex-wife and her ex-fiancé – both of whom serve to make him realize that along the way, he has fallen head over heels in love. 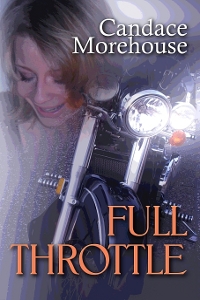 Samantha rocked back on her heels. She promptly lost her balance and landed heavily on her butt in time to see a biker on a beautiful, deep green Deuce with custom stylized flame graphics ride straight up the ramp just inches away. He expertly settled his front wheel between the guides on the dyno. He lowered his worn boots to the diamond plate floor of the trailer and shifted the transmission into neutral before he finally looked around and spotted Samantha on her rear end atop the baking asphalt of the parking lot.

“You’re not Dr. Doug.” He stated the obvious, as he removed his helmet and clipped it on the back of his bike.

But you are one big, gorgeous hunk of man. Samantha’s jaw dropped open in surprise. Her eyes raked the man’s long, lean form from top to bottom. She could tell he was tall by the bunching of his legs along the sides of the Deuce, and his shoulders were broad from the way they stretched the fine black leather of his Harley jacket. His hair was a mass of long, dark waves that brushed against his collar. The brilliance of his periwinkle blue eyes sparkled beneath a set of finely arched brows. He had a strong jaw edged by a neatly trimmed moustache and goatee sporting just a trace of gray. His nose was a bit off kilter, as if it had been broken at least once before. He wasn’t classically handsome, but his rugged features fit together quite nicely and lent his face a particular masculinity.

“No, I’m not,” she said finally, coming to her feet with an embarrassing crack of her knees. “But I can get your Deuce hooked up to the dyno and ready to run when Dr. Doug returns.”

“No offense, babe, but I don’t want you touching my ride. This is an expensive piece of custom machinery.” He leaned over slightly to affectionately pat the gas tank with its faint, ghosted silver flames. “Where’s Dr. Doug, anyway?”

Samantha sighed. His male chauvinist attitude was much the same as other men she’d run into during the short course of her career so far dyno-tuning motorcycles. In a deliberately even tone, she told him, “He’s checking on the bikini bike wash. I’m sure he’ll be back soon. In the meantime, I’ll get your bike tied down and hooked up to the computer.”

“Look, baby doll, you must be confused about where you belong. The bike wash is at the front of the shop. Now why don’t you be a good girl, put on your bikini, and step away from my ride. Or, better yet, go find Doug. I’m a busy man and I haven’t got all day.”

Samantha’s eyes narrowed as she strode up to the front of the dyno. Was he being deliberately rude or just incredibly dense? She ignored his stupid directive and yanked the end of a tie down through the fancy cutouts in the motorcycle’s front wheel. The man might be attractive, but his tone was arrogant and his attitude sexist.