Fun With Rick and Jade

Jade Li only wants what’s coming to her from her high-profile baby daddy—some child support and she’ll stay out of his life and off his radar. Committed to being a good mother, she’s left her high-priced-call-girl lifestyle behind and wants a fresh start. But because of her sordid past, she’s terrified of losing custody. What she needs, according to her attorney, is a husband. Enter Rick Jette, younger brother to Jade’s attorney. Rick could use a wife and child for a business deal his future hinges on. Plus, he owes his brother a huge favor that not even marrying a sexy ex-call girl could repay. Marriage is not what he’d expected. At. All. The good, as they play house, was better than he’d ever dreamed. The bad—having feelings for his instant family—turns out to be worse than he ever could have imagined. 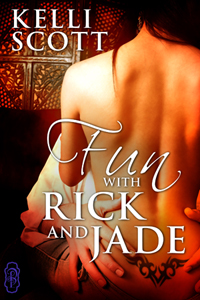 Fun With Rick and Jade

Rick Jette pushed the doorbell firmly. He heard it chime in some stately arrangement. Ding-dong-ding. His brother Bob thankfully called out, “I got it!” Thankfully, because Rick never knew what to say to Bob’s wife, Candy.

First of all, she was gorgeous. Second of all, she wasn’t too bright except about fashion, celebrity gossip, and proper martini mixology. Lastly, Rick couldn’t look her in the eyes, especially knowing she used to be a hooker. Correction—escort. Don’t want to make that mistake again. Note to self: avoid the subject of prostitution.

Two things Bob had lots of, money and teeth. Rick wasn’t sure he came by either honestly. He’d probably brokered some back-alley deal in exchange for veneers.

His brother was ten years older than Rick. The only things they had in common were a mother and a last name, because their mom never married either of their fathers. She did eventually marry a guy Rick and Bob both referred to as Dickhead, but the union never stuck like the name had. Even their mom called him Dickhead. The nail in the coffin of the doomed marriage. With a marital example like Mom, it was a wonder either son could make a relationship last longer than a one-night stand.

“Bob,” Rick replied. They hugged, including a manly back pat.

When they broke apart, Bob shoved the door closed and waved him along. “Girls are in the kitchen.”

Girls? He swallowed a lump that lodged in his throat.

What choice did he have but to follow? Looking back toward the closed door, it felt too late to run. He’d brought with him his appetite and a bottle of wine he clutched by the neck. Home cooking did not happen every day, at least not in his world. In the kitchen, the aroma of roasted garlic mixed with a lemony scent. Add cooking to Candy’s repertoire. Go figure.

She greeted him with a double-cheek kiss. “Jade, meet Rick.” She waved her hand elegantly in the direction of what looked to him like living, breathing perfection. “Rick, this is my friend Jade. She’s staying with us temporarily.”

“Pleasure.” She bobbed her head in his general direction, but her tone denoted boredom along with annoyance and a hint of dread as well.

Caught in the Middle (MFM)
Tonya Ramagos
In Shelf
$3.99
Tweets by
sirenbookstrand