Future Histories: Transgender Sci-Fi Erotica is a compilation of tales from three nearby futures. In “ToyGirls of the Personal Genome,” we visit a society in which transsexuals are admired, if objectified, while intersex individuals are cast off as third-class citizens. The world of “The Travesties” is one in which gender has become fluid for some, but the ability to shift from male to female and back again is denounced and feared by the medical establishment. Finally, “They Called Me Hijra” takes the reader to India of the future, where the “hijra,” India’s once-revered third gender, have been all but whitewashed out of existence. The remaining hijra hide in seclusion, known only to those who visit them in the night. 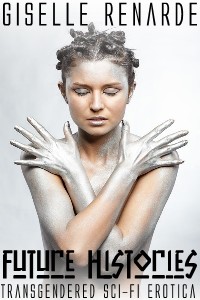 "[Giselle Renarde] is a wonderful author with an instinctive flair for writing realistic characters to whom readers can easily relate. No matter how fantastic or commonplace the setting, her characters draw us in, make us feel welcome, and gently encourage us to enjoy ourselves...These are stories that entertain and arouse, but they are also stories that make you think. I loved each and every one of them."

In the back pages of Fuck Weekly, Roisin counted fifty-seven photos of hot Asian escorts “in your area,” “available 24/7,” “satisfaction guaranteed.” Fifty-seven coy schoolgirl types posing with pigtails in their long black hair and teddy bears between their little tits. Roisin squirmed in her wet panties. What would they think of her if she called up? Some dry old wannabe dyke? She gazed at her phone’s face like it held the answers to all life’s mysteries. Maybe they’d think she had a guy watching from the closet. Did other women visit prostitutes? Maybe the girls in Fuck Weekly got requests like hers all the time.

Sitting on her living room floor, Roisin contemplated the photo of a bashful-looking girl called Alice—BBBJ? What the hell did that mean?–-when another picture caught her eye. Neo. She had crimson-black hair and a sneaky smile. “Anti-establishment artist”—exactly the type of girl she’d have gone after in her University days…if she had the nerve to go for any girl back then. Nineteen years and two straight marriages later, she didn’t even have the balls to ask a guy out, let alone approach a living, breathing female.

There was a catch, of course. There’s always a catch. Above Neo’s picture, in cold black typeface, hung the word, “ToyGirl.” Not what Roisin expected to be drawn to. Although, twenty years ago she’d never have anticipated requiring a prostitute’s services. Granted, back then the first of the genetically engineered ToyGirls wouldn’t have been more than ten years old. Aside from their creator, nobody knew they existed. Of course, it was a big controversy when it first came out that genetically male children were bred from scratch only to be pumped full of female hormones. When governments cracked down sex trafficking, science took over. The ToyGirls were like Geishas, in a sense. They were bred to a purpose. They fulfilled a need. Was that so wrong?

Roisin felt the conflict swaying her left and right. Neo was ten times more beautiful than any of those other women. And just think about that body: lovely soft features, blood-red lips, luscious tits, and a fully functional eight-inch cock. The ad specified. More importantly, Neo’s blurb said, “I specialize in first-timers.” She probably meant men who’d never been with a ToyGirl, but Roisin took it as a good sign nonetheless. She placed the call.