Jonah Kravec and Kristina Fallon are enemies on opposite sides of the law. When a mission seeks and fails to rescue Jonah, Kristina finds herself hostage in the arms of a strong and handsome rebel leader. As Jonah escapes and takes Kristina with him, they must survive a brutal and wild planet, along with the truth of themselves. As their ship flies them to unknown dangers, they find that the expanses of space, the fascist Omega Alliance, and the forbidden Quarantine Zone are the least of their problems. Their only salvation, and the biggest danger they have to watch out for, is falling in love. 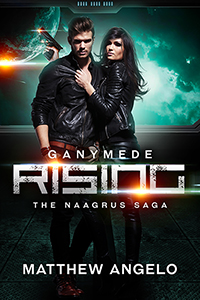 The sound of boots echoed down the corridor as Omega Alliance Lieutenant Kristina Fallon walked purposely towards the interrogation room. She was as confident as she was beautiful. Tall for a woman in the Omega Alliance, she stood almost six feet and radiated authority whenever she walked in the room. Her long black hair, that usually hung down to the middle of her back, was up in a bun today to fit with the standards set by the military government she worked for. Her skin was the color of dark mocha, with full red lips that emphasized a perfectly round face. Blue eyes peered around, gleaming with intelligence. She knew she was a woman to be reckoned with, but working in a male-dominated area made it difficult to get the chance to show her brains.

Even at her current rank, she had to convince many of the higher-ups that she deserved it. It had even meant having sex with one commander to get his vote on her promotion, but it had been enough for others to follow suit, and it hadn’t really bothered her. It was a necessary evil, and it wasn’t hard, either. She stopped next to a large door, a sly smile playing across her lips. It was easy. Her full breasts and curvy hips led to many men succumbing to her charms. Throw in a smile that could melt hearts, and the commander had been like putty in her hands.

“Let’s see who I have to interrogate today,” she mumbled to herself. “Ah, a rebel leader. This should be fun—and quick. They break all too easily.”

She laid her hand on the palm scanner and waited patiently as it read her DNA. The door slid open. As she walked in, two guards snapped to attention. Slacking as usual. Some mandatory extra duty will cure that quick. Both saluted her as they stood at attention by their duty station. Kristina smiled again. Yeah, I could get used to this.

“At ease, men. Anything to report?” There would be nothing to report since the last shift change, but it was part of protocol to ask.

“No, sir,” said one of the guards. “The prisoner is still secure in the holding cell.”

“Good. I want to look at him before I have you take him out of his cell. Maybe I can get him to talk without the extra help. I don’t want to make a mess.”

One guard snickered under his helmet as she walked over to the cell that held the rebel prisoner. Kristina looked at the man in the cell and her heart began to race. For a rebel, she found him strikingly handsome. Most of the rebel men she’d seen had proven to be weak, but this one, if only in appearance, seemed stronger than the rest. She let her gaze slide over him slowly and could tell he would be hard to break.

He was scruffy after a few days of imprisonment, but that only made her heart beat faster. His green eyes were wise and warm, but held an inner rebelliousness that promised many nights of passionate love-making—and soreness come the morning. Kristina took a deep breath and tried to compose herself/gather her thoughts, but his bulging arms and muscular chest, with just the right amount of hair, were too much to take in at the moment. This man would be hard to break, but even if it took all of her skills to break him, she would succeed.

“Jonah Kravec, I’m Lieutenant Kristina Fallon.” She looked up from her data pad. “You are charged with treason against the Omega Alliance, but we are willing to lower the charge to a minor infraction in exchange for some information.”

“Really? You mean that if I betray the rest of the rebellion and give the Omega Alliance all the information I have, then I’ll get nothing but a slap on the hand?” Jonah asked sharply, with enough sarcasm to make Kristina raise an eyebrow.

“Now, there is no need for such an attitude. I will get the information out of you,” she promised.

Jonah straightened to his full height, which was a good few inches over hers. “Do what you need to, but I won’t betray the rebellion for the Omega Alliance.”

“Too bad. Your record, while you were part of the Alliance, was stellar,” she pointed out. “What happened, Mr. Kravec?”

“I learned too much and saw more than my heart could handle to stay a part of it any longer,” Jonah whispered.

Kristina observed him for a moment. He had a soft heart, which may make it easier for her to break him than she’d initially guessed, but then again, it may make it harder still. She wondered how much strength he had. Strong enough to make things a little rough. It’d been awhile since a pair of strong hands had touched her body, but now was not the time to dwell on such thoughts. There was a job to do.

A Home for Three (MFM)
Marla Monroe
In Shelf
$4.99
Tweets by
sirenbookstrand