It’s summer vacation. Lanta Cross is sixteen and at odds with Bernadette, her adoptive mother. She’ll do anything to get away from home and out from under Bernadette’s considerable thumb.

Already working one part-time job at a local café, Lanta takes another at Saint Catherine’s Elder Care Facility. At first it appears her duties are something she can do blindfolded -- wheeling residents to and from activities, cleaning up their messes, and mainly staying out of the way of the LVNs and the administrator, Ms. Andrews. During her first week at the home, Lanta meets and befriends an elderly lesbian resident, Gertrude Weiss. They bond quickly.

Yet not everything is what it seems at St. Catherine’s.

When Gertrude’s journal full of her thoughts about her late partner goes missing, the abuse begins. Gertrude’s meals are late and cold. Her seemingly friendly roommate asks for a transfer to another room. As the harassment escalates, Gertrude’s physical and emotional health deteriorates.

Lanta and her mother must pool their resources and work as a team to save Gertrude’s life before it’s too late. Will they be in time? 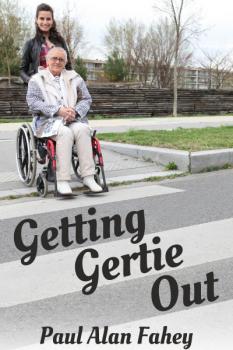 It was Friday, the end of my first week at St. Catherine’s. Frieda told me they had Gertrude Weiss down for Bingo, and then for one of Mrs. Dempsey’s writing projects after that. Would I collect her, make sure she made both activities on time?

I went off in search of her room, found it, but no one was there. I even checked the bathroom just in case. Maybe she was ill or she’d fallen. Ms. Andrews, on one of her flybys earlier, told me to go slow when walking the ambulatory folk to activities. “One fall, a broken hip, and things deteriorate fast,” she said. “Just be extra careful.” A quick wink my way and she was off. Again.

I called Gertrude’s name. Knocked three times on the bathroom door, waited, and then opened it. Empty. I went back to the door and looked down the corridor. I’d learned over the past few days, the place was pretty much a ghost town during activities. It was so slow that I often ventured into the staff room and stood around chatting with the nurses and other staff members on their breaks. Like me, they were wary, always checking their watches. Then glancing at the door for a possible Ms. Andrews sighting. As far as I could tell, they were terrified of the small woman.

Gertrude was going to be very late for Bingo. Would they blame me? I imagined someone calling out I-25 in her absence, the one and only number on Gertrude’s card necessary for a grand slam win. She was missing all the fun. It was then I saw the notebook. One of those stapled things used for school exams -- the dreaded blue book. Just looking at the damn thing made me sweat. But that didn’t stop me from going further.

Mistake number one. I sat down on the bed. I’d already been warned by one of the nurses to always look busy. “Never sit unless you’re on break. They’ll fire you if they catch you loafing. No matter how bored you are, stay on your feet.”

Mistake number two: I picked up the book. Gertrude had written her name in black ink on the cover. She had beautiful handwriting. The book was like a diary I supposed. Personal stuff. But since it was out in the open, I thought, why not? Like I said, two big mistakes, one right after the other.

I flipped through the book, went back to the beginning, and started to read.

I don’t like this place, Phyll. I never liked it. Even when I saw it the first time I hated it. Hated it on sight. I’ve never done that before. Hated anything. But I hated this place. I still hate it. I’m stuck. Really stuck. I’m in here, hook, line, and sinker. No stopping to collect 200 bucks and not a Get Out of Jail card in sight. Just me and the rest of the inmates.