Going to the Dogs

Sam Kendall is a cop with a mission; find the killer who murdered his partner and track down the diamond thieves behind the killing. Chief suspect Jodie McBride is a brilliant dog trainer but a loser with men. Dog-hating Sam is stuck with a junk food addicted poodle as his new partner and stuck on a cute redheaded dog lover that he desperately wants to be innocent. Mix in an assortment of eccentric pooches, their offbeat owners, baseball fans and two very smart canines who know humans can’t be trusted to know a good thing when they see it. Before Sam and Jodie know what's happened, everybody is going to the dogs. 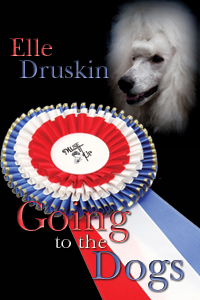 Going to the Dogs

“Not so fast,” O’Mara said. “You don’t handle this alone. You’re getting a new partner.”

Sam groaned. A new partner? Not this soon. The funeral was only last week.

"So soon?" Sam plopped back on the chair. He willed himself to remain detached, but a huge lump formed in his throat.

"You know how it works, and no, you can't work this case alone. Take it or leave it."

In the back of his mind, Sam knew there'd be a new partner assigned. It was standard practice on the police force, but this soon? His heart balked at the thought, and a trickle of sweat dripped down his back. Nobody could replace Chris, the world's best partner. Street smart. Wicked sense of humor. A Yankees fan. He recalled her first words of introduction almost four years ago.

“Get one thing straight, Kendall. I’m married, and I don’t mess around.”

Chris, her husband Paul, and their two kids were the closest thing to real family Sam ever knew.

Sam forced himself to sit up and pay attention. “Yeah. New partner.”

He silently plea-bargained with the Almighty. Please, not a rookie. Please again. Not another woman. It would be too tempting to compare another woman to Chris and find fault.

O’Mara pressed a buzzer on the desk. “Estelle, lay off those doughnuts, and bring him in now.”

Sam exhaled in relief. A guy. Good. They could talk football and baseball. If the new partner was single, maybe they’d double date, or have a beer together after work. Tension seeped out of his shoulders. This would work out. It would be fine.

The door slammed against a file cabinet with an almighty crash. The glass window that opened onto the station room cracked down the middle from the impact.

A giant cotton ball streaked past Sam. Estelle, the chief's secretary, chased after a beast with a tail that resembled an oversize Q-tip. Estelle skidded to a halt and teetered on purple spike heels before hitting the floor. Cotton-ball jumped at O'Mara and knocked over the coffee mug. Brown liquid overflowed the desk of papers, stained them, and dripped onto the floor.

The animal padded around the desk and sniffed Sam's crotch. Before Sam could swat the pest away, it jumped up and slurped its pink tongue all over his face.

“Argh. Get down!” Sam batted at the animal. If there was one thing he hated, it was dogs. If you could call this thing a dog. Sam's nose twitched at the yeasty scent of baked goods.

“That pig ate a whole box of doughnuts,” Estelle complained. "And I broke a nail trying to stop him." Violet painted fingers waggled in O'Mara's face. The boss grimaced and addressed the dog in a gruff tone.

The dog wagged its pom-pom tail at O’Mara.

O'Mara made a sour face. “That’ll be all, Estelle.”

"Is that so?" Estelle boosted up on one knee, braced herself on the desk, and stood with hands on generous hips encased in purple lycra. “Who’s gonna clean that puddle next to my desk?"

“I said that’s all for now.” The chief’s curt tone made it clear he was in no mood to discuss any gifts Vanilla deposited to replace the stolen pastry.

Sam’s head angled toward the door. “Where’s my partner?”

O'Mara shook his head but avoided Sam's eyes. "Top class credentials. You need him for your undercover persona."

Vanilla's head followed the exchange like a tennis match. Without warning, the poodle shot out the door.

With that, O'Mara picked up a file and turned his back on Sam.

Shouts echoed into the office from the outer room.

"Hey! That dog just grabbed my pastrami on rye!"

Sam mentally counted to ten. This couldn't be happening.

"Who owns this mutt? He scarfed down the pizza!"

Sam shot a glance at his boss.

No response to the beast gorging his way through the Petty Crimes, Homicide, and Assault Departments.

Sam gazed skyward. "Chris, I hope you're watching. If you are, you're wetting your pants with laughter."