Gone with the Dead-An Anthology of Romance and Horror

Gone with the Dead

An Anthology of Romance and Horror where Gone with the Wind meets The Walking Dead!

When a convention of more than 4,000 romance writers and readers descends upon Atlanta Georgia, it can only mean one thing…a mash-up of two of the finest Georgia traditions.

Stories By Christina and the Virus by Sarah Bale - A Dead Man is Hard to Find by Ellay Branton - A Piece of Him by R. L. Merrill - A Happy Medium by Freddie Milano - Bait by Isabelle Drake - Bloody Line by Carolyn Haven - Devil’s in the Well by Harley Easton - A Ferocious Blossom by Marie Piper - Kissing Summer by Megan Hart - If I Only Knew By Genevieve Williams - Animals by Sue Ayers - Dogs of War by Andrew Robertson - The Music Man by Kimberlie L. Faye - Fallen by Xio Axelrod - Leftovers by Cassandra Chandler - Here for You by Kate L. Mary 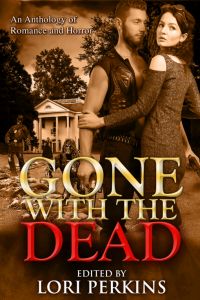 Gone with the Dead-An Anthology of Romance and Horror

She woke to the smell of coffee. The stranger, jacket discarded and now wearing just shirtsleeves and an open vest, had a fire going and boiling coffee. “Got a day or two worth of water left,” he said when he saw her wake. “Took a peek outside. There aren’t many of them I can see. If we take my gun, we can probably get the barrels filled.”

He looked up. “I can’t rightly leave you alone here and go on my way.”

“You’re a brave woman,” he said. “I’ve never seen such balls—forgive me—on a daughter of the south. The cream curdled, so we’ll have to drink it black.” He handed her a mug of coffee.

“There’s molasses.” She fetched the bottle, and they stood together, drinking sweet dark coffee for a moment. It was almost pleasant. “Have you encountered many daughters of the south?” Elspeth asked, comfortable enough to tease. The idea of a man like him in a room full of the girls she’d called friends made her giggle.

“A few. Most wouldn’t lower themselves to speak to me.”

“My Father used to call us the Ferocious Blossoms. Most of us have been scared of your kind since the war by the warnings of our fathers and brothers.”