Grand Troubles awaitsAndrea Watts, a nuclear medical technician who goes on a seven mile hike into the Grand Canyon on Grand View Trail. She quickly discovers nature can be downright nasty. A storm is brewing and an angry Mama mountain lion threatens her life in a classic standoff of woman versus wild. Her only hope for survival is a can of bear spray, a pocket knife, and her desire to survive.

Connor Winston is a law enforcement ranger working the south rim of the Canyon. His duty for the day is to survey the Grand View Trail and change the toilet paper in the rest area. A woman’s scream draws his attention and soon he is caught in the middle of a cat fight. One of his opponents threatens his life, the other his heart. 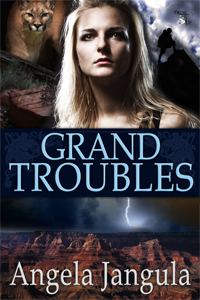 AndreaWatts snapped her fanny pack onto her hips, turned on her head lamp, and looked up into the darkness of the Grand Canyon.

“Hello, Dad,” she whispered. The wind stirred around her and she could feel him with her.

Andreageared up to hike the Grandview Trail. Every year she had hiked with her dad in the Canyon. After his death, she came back to remember him and the times they spent together. Her goal was to hike every trail in the canyon.

She reached into her Jeep and picked up her purse and loose change, shoving them into the center console. Her head light shone on the can of bear spray inside the console, a reminder of her dad and how he always had insisted she carry it. She pulled it out and snapped the holster onto the belt of her pack, afterward, shutting and locking the console.

Andrea zipped up her windbreaker. The weather report last night predicted a storm would move into the canyon area around four in the afternoon.It was six in the morning, plenty of time for her to do a seven mile day-hike and be out around noon. She swung her door shut, took two steps, tripped on a rock, and fell.

“Awwgeeez!” She dusted herself off and looked back at the parking lot. Thank God no one witnessed that embarrassment. Odd there were no other cars in the lot or people waiting to take pictures of the sunrise, but for sure other hikers would hike today. At least a short hike. After all, this was the Grand Canyon.

Three hours later, Andrea arrived at an overlook on Horseshoe Mesa. The morning sunrise had passed and canyon walls surrounded her. She pulled off her headlamp, put it in her pack, and turned off her camera. She had taken over one hundred pictures andneeded a short break so plunked herself down on a rock to enjoy the river view. The turquoise Colorado River wound through the massive cliffs and she whistled at its majestic beauty. Two rapids, she noticed, had to be class four or more. Taking out a candy bar, she broke off a piece and shoved it in her mouth.

The chocolate melted on her tongue andshe savored the caramel peanut flavor. What a great breakfast. Whoever invented those chalky, gross energy bars was missing out.

Andrea took another bite when she heard a faint, “grrrrrrrrr.” She turned in time to see two mountain lion cubs run across the path twenty yards away. They wrestled and rolled. Andrea grabbed her camera and moved behind the rock she’d sat on, focusing her lens on the two cubs. Then a shuffle behind her prompted a little voice in the back of her mind. As she looked over her shoulder it screamed, “Duh…what did you think would be following a baby mountain lion?” Mama lion stood fifty pacesaway with her ears pointed down.

Mama lion did not want to play. She held her head low and growled. Andrea backed against the side of a limestone rock formation away from the edge of the canyon. She stood tall and kept her eyes on the lion.

No sudden movements. Don’t give the lion any reason to freak and attack. She took in a big breath.

Connor Winston stepped out of his Ranger Vehicle and stretched his arms. He walked to the Grandview Trailhead. The sun peeked over the horizon and greeted him. He nodded. “Good morning, canyon.” His ranger duty for the day required him to survey the Grandview Trail and check on damages. He glanced around, noting two cars and a jeep in the lot. Probably foreign tourists braved the late cold October weather to get a good view of the canyon. They’d snap five-hundred pictures of the canyon only to get home and realize nothing quite captured the true enormity and beauty of it.

Nobody in their right mind would backpack the complete trail down to the river when a storm warning had been issued.