All Mike Johnson wants is a little time to think, but he is about to find out that life is what happens while you’re making other plans. It delivers what is available. What you do with it depends on your character and attitude. Fortunately for Mike, attitude comes naturally.

It’s a rule of nature that trouble gravitates toward the person with the time and ability to handle it. Mike does not want any more trouble in his life but won’t shrink from it when it comes. And it does – from two directions. Real Estate agents are being killed, and his next door neighbor, who also happens to be a real estate agent, is entangled in a major league real estate scam. While looking into the murders, he discovers the dead agents and the scam are tied together in a twisted scheme of lethal revenge that almost ensnares Mike and his son and daughter in a web of big money and dead bodies as he follows the clues from Southern California to Phoenix and Las Vegas. Slick con artists, racist killers, beautiful strippers and a nutty neighbor keep Mike occupied as he wrestles with the question of what to do with the rest of his life. As the chase progresses, he discovers as much about himself as he does about the cons, the crooks and the crimes that have always been so much a part of his life.

Along the way he collects more bruises and broken bones than he does answers, but it isn’t his nature to quit no matter what the obstacle or the risk. Soon he is in so deep, he becomes a suspect in several murders with his picture on the front page and both the police and the killers hot on his trail. His only hope of salvation is to get the evidence that will prove his innocence. 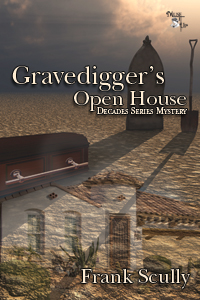 Something about shopping makes a man’s feet sore, and mine were hot, tired, cranky, and swollen. I’d been complaining about them for the past three stores. But that wasn’t the reason Lynn had ordered me to sit.

My two offspring were engaged in nefarious activities: to wit, they were buying one of my Christmas presents.

I’d seen the whispers, the furtive looks, and the smiles hidden quickly behind their hands. They were plotting.

I was trying to spot which store they went into when I noticed a dip crew at work. A man with heavy sacks stretching both arms was walking along not paying attention to where he was going as he ragged on his wife about something. Another shopper similarly laden crossed into his path, and they collided. Sacks and packages dropped. People stumbled, caught themselves, and everybody apologized, gathered up their goodies, and moved on. What was lost in all the commotion and not noticed by anyone except me was the second person, a well-dressed man who had come up behind the mark and dipped into his pocket, pulling out a wallet just as the collision occurred. The dip casually walked away and slipped the wallet into the Gucci shopping bag of a third member of the team who brushed by him and kept going.

A very smooth, professional job. It was a shame I was going to have to mess it up. The sweeper with the Gucci shopping bag and the victim’s wallet was headed in my direction. The others had moved on down the other way.

I waited until the sweeper was so close she wouldn’t be able to get away before I stood up and with two steps was in front of her. She tried to step around me innocently.

“You want to come along easy, or shall we chase each other down the promenade?” I asked, blocking her path. From a distance, she had looked like an ordinary, very nondescript woman about thirty-five. Medium height, a little overweight, clothes bought off the rack at a discount department store, light-brown hair worn in a simple style. Up close, I could see she was thinner than her clothes made her appear, and the hair was a wig.

The expression on her face flickered ever so slightly. She pasted her shopper mask back on and said, “What? What do you mean? What are you trying to do? Rob me? Here in front of everybody?” Her voice rose, and she added a note of hysteria for color. Shoppers started to notice and step away from us.

“Nice try. Let’s go find a cop or Mall Security. You can make a complaint about me to them,” I tossed back just as loud.

Her eyes flicked every direction, hunting for an escape route. I stepped in close and whispered, “You’re busted. Don’t do anything stupid. You won’t get five feet.”

She backpedaled away from me. I moved with her and forced her up against the window of a women’s clothing store. Customers on the inside started pointing at me and talking to a clerk. I knocked on the window and motioned for the clerk to come out while I kept my eye on the bag lady.

“Can I help you?” the clerk asked, keeping her distance.

“Yeah, call security and get some cops up here. This lady is part of a pickpocket team.”

“Oh dear!” The clerk scurried back into the store and told everyone what was going on as she made her call. Spectators began gathering for a spot of entertainment.

The bag lady was getting a cornered-rat look in her eyes. She had at least one wallet in the bag and probably a few others, too. God knows what she had on under her baggy clothes.

“Dad?” I heard Matt call my name as he came up behind me.

“Not now,” I waved him off. “Wait with Lynn while I take care of something.” I couldn’t look at him. Taking my eyes off this lady would be equivalent to opening the door to her cage.

“What’s going on?” Lynn asked. Excitement and concern mixed notes in her voice and gave away her thoughts. What was her dad doing to make that poor woman cower against the glass?

“You bastard!” the bag lady snarled. “Why’d you have to interfere? It didn’t cost you nothing!” She hawked up a gob and spit in my face. The crowd ewwwed and grimaced.

She took the opportunity as I blinked to try and throw the shopping bag into the crowd to contaminate it as evidence. I got lucky and blocked her shot. The bag fell at our feet, where it upended, spilling its contents of wallets and purses.

Her next shot was a straight jab to my nose. Someone had taught her how to box. I heard cartilage being mashed around. No stars came out, but it crossed my eyes and rocked me back. Instinctively, I grabbed her arm. Next, she kicked me in the shin with her sharp, pointed shoes.

“Goddamn!” I swore. My temper flared, and I twisted her arm viciously, bringing a gasp from her. An angry whisper ran through the mob. Whose side they were on? They hadn’t seemed particularly perturbed when she had been beating on me.

“HOLD IT!” Two uniforms parted the crowd and took up positions on either side of me. “Let go of her!” one ordered.

I released her and held my nose. It hurt like hell. My hand came away wet with blood.

“Now why don’t you tell me what’s going on here?” the same cop asked. The other started to direct the people to move on.

“I was sitting on that bench over there when I observed a pickpocket team at work. She’s the receiver. Those wallets on the floor are from her bag,” I said from behind my hand. My nose kept on dripping blood through my hand and down my shirt.

“He’s lying! They’re his. He’s the thief!” she leaped at me, pushing me into the cop questioning me.

I was still holding my nose and feeling sorry for myself when she charged into me and gave me a short, stiff jab below the belt, where she rang my bells. The two cops were caught completely flat-footed. Before they could react, she was off and running, threading her way through the crowd expertly. One cop took off after her in what I knew would be a futile chase. The other called it in on his radio.

I wobbled there, hunched over, moaning miserably, my hand still covering my throbbing beak. The other part of me that hurt wasn’t something I could hold on to in public and maintain any kind of dignity. People stared at the silly, blue-in-the-face man who looked and felt like he had just been zapped with a cattle prod in his tender parts.

“Are you okay?” the cop asked. His nametag said Foley.

“Just Goddamn peachy keen!” My voice came out a cross between Daffy Duck and Porky Pig. It’s hard to sound like a tough guy when you’re sucking air from a blow to the balls and have a snoot full of blood.

I nodded. I knew the drill.