Workaholic elf Dagfinn Snorkelbone thought he could relax in his new position working in the Valentine’s Day Department on the enchanted Evermore Island, but he was wrong.

While throwing an office party to celebrate his promotion, Dagfinn meets the charming, but dangerous, Julian, who runs the darker holidays on Evermore Island. Rumors swirl around the island that Dagfinn is friends with the mysterious wolf.

When a series of misfortunate events threaten to destroy the fledgling Susan B. Anthony Day Department, dedicated to celebrating the suffrage movement, Julian is the prime suspect. Dagfinn is roped into going undercover to find proof of Julian’s wrongdoings.

Can the elf complete his mission in time, or will the saboteur’s nefarious plans succeed in destroying suffrage celebration? 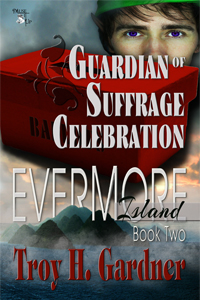 “Something’s up with Julian,” Cupid explained. “There’s been so little contact between him and anyone on this side of the island until the last few months. Besides attending your party, he’s put feelers out to the heads of some of the major departments, as well as…those with smaller staffs.” The cherub looked at Marquette, careful not to insult her. Dagfinn understood he meant “small holidays” or, as some would say, “unimportant holidays.”

“I told him to screw off,” Marquette said. “A week later, I got a computer virus that deleted the entire department’s files and toasted our computers. Luckily, I had backups at home.”

“Great,” Marquette said. “The next week, the sprinkler system went off in our department only. Soaked everything. Ruined furniture and destroyed paperwork.”

“Exactly.” Marquette’s nostrils flared. “I will not be bullied by a wolf in very pleasant clothing.”

“We thought we'd have to shut down the department,” Chloe added. “But then Marquette said we could work from her home.”

“Do you know anything about this, elf?” Marquette suddenly asked. “You obviously have an in with Julian.”

“What? No, no. He crashed my party, that's it.” Dagfinn took a step back, fearing the tough fairy would pounce. “Is that why I'm here, because of Julian?”

“Of course not,” Cupid said placidly. “But I would like you to meet with Julian. See if you can learn anything about what he’s up to. I’d like to take this to Gregorian, but we can’t be sure Julian is behind it. I don’t want to pit those two against each other unless it’s warranted. I don't think I need to remind you of the bad history between Julian and Gregorian.”

“The old wolf is making a power play,” Marquette announced. “Can you handle helping us and Susan B. Anthony Day like you helped Cupid, or are you really a spy?”

“Of course I want to help,” Dagfinn said, feeling all the pressure. “I certainly don't want the people who celebrate Susan B. Anthony Day in...”

“Florida and Wisconsin annually, and West Virginia every other year,” Marquette replied proudly.

“West Virginia agreeing to acknowledge us on every other election day was a real coup for us,” Chloe stated drolly.

“Just one question,” Dagfinn said. “What exactly is Susan B. Anthony Day?”

Marquette threw her hands in the air in a huff as Chloe explained, “She was one of the pioneers who fought for the right for women to vote in America. The holiday celebrates women’s rights and equality.”

“Officially, you've earned yourself a mini-vacation for rescuing me,” Cupid said. “Unofficially, you will respond to Julian's business offer. Learn what you can, get a feel for the situation. And tell no one. Julian could have ears anywhere.”

Infiltrate the wolf's den? No problem. At least that'll look great on my annual review.