The Farrow Gang robs banks with great success, but when Evan Langer is allowed to join, he unsettles things. Young and suffering the recent loss of his outlaw older brother, Evan is in need not only of new partners in crime, but friendship and solace.

Both Wade Farrow and Roy Fitch, gang leaders and sexual partners, take note of Evan, but it's Roy who orchestrates time alone, where he finds Evan an eager partner. As the gang continues their robbing, Roy finds himself falling deeply for Evan while in turn resisting Wade. Tensions build between the men, and there seems no solution in sight, until the law steps in. 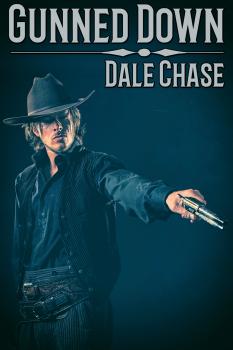 Best trick of any outlaw gang is spare horses stashed partway along the planned escape route. When a posse gets thrown together, they lack the planning we do and we outrun them every time because we change mounts while they wear out theirs. So on the Kettner job we leave Virgil and Dewey with eight of Noble's stock just outside Mercy while the rest of us go on to get us some money.

We leave Leland and Harry out front with the horses to keep watch while Wade, Evan, and me go inside quiet like, just cowboys looking to do business. When it's down to just two customers and the one clerk, we pull down our masks and Wade calls out "throw up your hands." The deed is then done. Evan and Wade keep order while I throw cash into sacks and there's a good lot of it. With two sacks full, I go back out front, look around to see if it's clear, then make ready to leave.

Dewey and Virgil are mounted and I swing a sack to each, then Wade, Evan, and me climb into the saddle and we're off at a gallop just as somebody yells "holdup." Some fool takes a couple shots which fall short and we're well on our way.

It takes time to gather a posse and we use this well, riding hell bent which, astride a beast in full gallop, is nearly as exciting as the robbery itself. A man's horse is powerful worked up in such pursuit, as is the fellow on his back, and while I mostly look ahead I do steal a sidelong glance now and again to see Evan who keeps pace at my side, mask now off to reveal that face I covet.

We change horses as planned, Virgil and Dewey to get the others back to Noble while we turn east to avoid the posse which may or may not be on our heels. Evan has already told of a canyon hidden in the foothills and we ride there, going through a narrow passage that shields the place from view. A trickle of water bubbles down the rocks to form a pool and the horses and ourselves drink while Harry climbs up to stand guard.

"We'll stay the night," Wade announces, dropping money bags to the ground. We spread our bedrolls, eat hardtack. There'll be no fire come night as smoke would give away our presence.

Wade counts the money while we look on. He always does this and I kid him he should have been a banker. He doesn't laugh like usual. Things haven't been the same since Evan and me took our scouting trip, like he knows we got up to mischief. I don't comment on this. We have yet to fuck.

"Twenty-six thousand two hundred eight," Wade says. "We'll split twenty-four among us, three thousand each, the rest to Noble." He then counts it into nine piles with all in agreement.

We stash money in saddle bags, some to pocket. Rest of the day we spend snoozing or planning how to spend the money. Always a good time with new money. Dusk falls over us and Harry comes down to say nobody is in sight.

"Wore out their horses," Leland declares and we have a good laugh, though Wade insists a man remain on guard. Being Leland is feeling frisky, he gets the task and doesn't object.

Evan stays mostly quiet. A look passes between us now and again and when it's dark I can hear a hand working a prick, then low grunts as he comes. I'm hard as a post, aching to get at him, but I hold back. Usually I just climb onto Wade there in the dark because nobody cares who does what, but I leave off and pass a restless night.