High jinks at the high school. When a carton of homemade disks were accidentally left in his car, substitute teacher Todd Decker got the shock of his life. While he watched the sexual antics of the staff of Riverside High, his wife joined him and the fun begun.

It didn’t remain amusing very long when the Decker’s realized they were being pulled down into a sinister plot. A plot orchestrated by a black crime lord, James Menken. Donna Decker, Todd’s wife, was the target of Menken and he used her to his own ends. After the crime boss made Donna the centerpiece of an all black gang-bang and threatened to make the video public, Todd knew he had to do something, especially when he realized his wife was quickly becoming addicted to group sex with black men.

As you might expect from the self-proclaimed King of Interracial Erotica, there is a lot of sex in this yarn. There is plenty of one on one, two on one, and more on one sex. You’ll have to read this story to find out if Todd and Donna can climb out of the black hole they found themselves in. 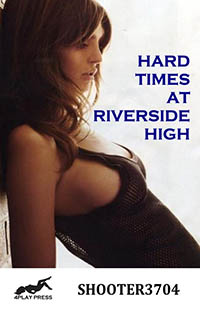 The room was dark, but there was more than enough light for me to see them clearly. The black man and the white woman were both naked and engaged. I couldn’t say he was mean, just rough and demanding. He used his cock as a weapon on the woman. Anything of hers within reach was fair game. Nipples, labia, clit, or ass. He used her nipples to reposition her and of course, she followed. His actions had to hurt, but she suffered in silence.

He wasn’t as well hung as some men I’ve seen, but he was bigger than me by at least a couple of inches. The woman took his stiff cock deeply in her mouth when he told her to. He chided her when he rammed it down her throat far enough to cause her to gag.

After enough of what he considered foreplay, he pushed her back and roughly spread her legs open and back causing her pussy to gape open. He instructed her to put his cock in her and she reached for his dick. She positioned it at the opening of her wet pussy and he shoved it in her. That ended the silence. From that point on the woman became very vocal.

The actual fucking was almost an anticlimax. Almost, but not quiet. He fucked her in the missionary position for about ten hard, arduous minutes. During that time, it was obvious she had several climaxes. Then using her hard swollen nipples he got her on her knees and fucked her from behind. In the doggy position he rammed his cock in her for nearly fifteen minutes giving her several more orgasms. She was still vocal, but not so loud and there was more whimpering than actual words.

My wife Donna is approaching thirty-nine years of age. To be absolutely truthful, Donna, is better looking and a lot more sexy than she was at nineteen and she was a knock-out back then. Nineteen was her age when we got married. In case you can’t or don’t want to do the math it’s twenty years of wedded bliss.

Okay, not every day was blissful, but most were. Like every married couple, we had our ups and downs. The fact that Donna couldn’t conceive a child was a real downer. That took a lot of work to get around, but because we loved each other we did work around the problem. A few weeks short of our second anniversary we adopted a little six year old mixed-race boy. Donna insisted we keep his given name which is Gideon. We gave Gideon our last name which is Decker. My name is Todd Decker.

Gideon’s mother was apparently white and his father a black man and he got the best of both races. Even to a manly man like myself, he was handsome. He wasn’t very dark skinned and his hair was more curly than kinky. His big brown eyes seemed to be something the girls all liked because he never lacked for feminine company; not after he discovered the difference in boys and girls and liked the difference.

I started buying condoms for him long before he left for college. I also made sure he knew all the facts of life that I knew and what I could get from books. Gideon knew he wanted a military career very early in life. He signed up for ROTC before he even got to the college campus.

Gideon finished his last year at college and had enlisted in the Marine Corp and he was off somewhere learning how to kill the enemy. Since Gideon had been the center of Donna’s and my universe, we had a hard time with the empty nest syndrome when he left for college.

Not long after we got married, I started my own printing business. The business took off and afforded the three of us a comfortable living. I was smart enough or lucky enough to recognize the warning signs and I sold out before personal computers put a major hurting on the printing business.

On the advice of a close friend, I invested the money from the business sale in a computer business and again I got lucky and it took off. The result of our good luck put Donna and me in a very good financial position.

At a time when most of her peers were settling into early middle age, Donna wasn’t having anything to do with it. She started working out at least once a week and ran nearly every day. As a result Donna had a firm, but not hard body. As I said, she actually looked better than she had as a teenager. At thirty-nine, she could pass for a woman ten or more years younger.

Since I wasn’t actually employed, I started teaching as a substitute teacher mostly to have something to do instead of for the income. Donna kept busy with her clubs and her civic organizations.

The year Gideon left for college, Donna and I took our first actual vacation. We went to the Caribbean and had a great time. Donna looked damned good in her tiny bikini. One she would not be caught dead in at home.

I mentioned that Donna was an adventurous person and it seemed I was always discovering new things about my wife. For example, last year we took a motoring trip. We packed and left with no particular destination in mind. It was a fun trip. That was when my suspicions about Donna being an exhibitionist were proved to be true. I convinced her to take off her shirt and bra and flash the truckers we passed. From the blaring air horns, the drivers seemed to enjoy the show.

It didn’t surprise me that Donna would flash her tits, but what did surprise me was how much it turned her on. She insisted, even demanded that I pull off at the next rest stop where she attacked me.

It had been a long time since we tried fucking in a car, but it is like riding a bike. We got it figured out and did the deed. The people parked on either side of seemed to enjoy the show. It embarrassed me a little, but Donna just waved at them as I hurriedly drove off.

She was a willing participant in flashing for the rest of the trip. Our trip took us to the coast of the Gulag of Mexico. One night we were in a beachfront motel and I fucked her in front of the large picture window with the curtain opened. Several people came by and some more than once. Later I took her naked out onto the balcony and made her stand with her beautiful tits on display to the people walking along the beach.