Seeley Frain is all suits and ties and his fancy sedan. He makes his money working real estate flipping houses with the help of master contractor Chase Washburn. And it’s next to impossible for him to deny he’s attracted to this ruggedly handsome man. But the fear that his feelings may not be returned has kept Seeley from making any moves. At some point, though, his desires are bound to get the best of him.

On the flip side, Chase Washburn is fully aware of Seeley’s attraction. He’s made it a game to toy with Seeley, everything from wearing his jeans a little tighter to making suggestive remarks that sound dirty. He’s bound to make the real estate agent his one way or another, but what’s the harm in having a little fun first?

They stepped into what used to be a carpeted monstrosity, now in the process of gaining new life. Chase had torn out everything old. A deep soaker tub had been positioned under the window, nestled in its own little nook complete with shelving in one that would be perfect for shampoo bottles and candles for the romantic nights. In the corner, slightly slanted, was a huge walk-in shower, more than enough room for two people to enjoy each other. The plumping was done, jets and a new rain shower showerhead had been installed. The tiling needed to be added to the floor and the walls. Across from the tub was the double sink vanity with plenty of storage.

“Yeah, it’s definitely going to be a selling point when it’s finished.” Chase pulled a knife from his belt and bent over a pile of boxes in the corner, making sure to position himself just right that Seeley got a great shot of his butt. “Now, is this the tile you ordered? I thought you had something else picked out.”

The tiles were large in varying shades of brown that resembled stone.

Seeley fidgeted with his tie again, a nervous habit Chase found endearing. Though it made him want to tug the realtor around with it, slip it from around Seeley’s neck, wrap it around his writs and tether Seeley to the headboard so that he may enjoy making Seeley moan and wither with pleasure. He needed to stop letting his mind wander. The whole point of this game was to make things uncomfortable for Seeley, to push the realtor into making a move.

“Oh, these are perfect,” Seeley said, taking the tile as he tried to maintain his businesslike demeanor. “I think if we paint the walls in a soft brown or beige with off-white accents it’ll look like a million bucks.”

“Okey dokey,” Chase said, taking the tile back, setting it down in the box.

Seeley stood there, a hand on his hip, the other smoothing his tie. “Is there, um, any way I can help? Maybe move things along?”

His original plan had been to draw out this little game of his, make Seeley squirm for his own enjoyment, only now he was pushing it, the tension between them ratcheting up with every breath. If he kept going there was no telling what he might do, and yet, it seemed he just could not let up. The dance they were doing, though fun, was starting to get tiring, old, resulting in far too many days starting and ending with cold showers. He wanted to back Seeley up against the wall, loosen the belt from his slacks, and ...

He blinked, the image fading. “Huh?”

They stared at each other for a moment, the air crackling between them. If he was going to have his fun it was now or never.

“You could polish the knob,” Chase said, pleased that he managed to keep his voice level, no trace of a smile on his face, the perfect picture of seriousness. 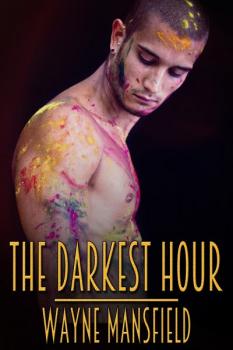