Ed Norwood is living in limbo. He has his friends, his job, and his parents, but he's feeling restless. More so now that his ex has found something perfect with another man. Maybe it’s time to reevaluate and move on. He wished he knew.

Duncan Nichols is the man who could change everything, if he is willing. Ex-Army Veteran trained in canine Search and Rescue, Duncan and Ed's first meeting is fraught with tension and worry after massive storms slice through Silo. Duncan is surprised to find a community that is open and giving in Silo, and is welcomed to return to show off his dog's skills at the annual firehouse fundraiser.

Without the stressful distractions of storms and missing people getting between them, lust flares nearly out of control between the two men. Only Ed wants and needs more in life than a friend with benefits, and when he says as much, Duncan is quick to put the kibosh on even dreaming of a happily ever after. Then real life intervenes when Ed's mother falls ill, and Duncan returns to Ed's side in support.

Can Ed break through the barriers Duncan has put up to protect himself? There's more to Duncan than the left hand he habitually hides. Ed believes if Duncan cracks even a little, he can prove it. If it just wasn't his heart at stake to make that happen... 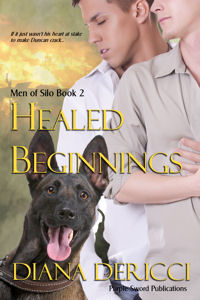 Duncan curled up Margo’s leather leash in his hand, though he knew she wouldn’t bolt or misbehave without it. It gave him the time to weigh the pros and cons of outing himself to someone he hardly knew. With friends, apparently good friends like Chris and Jamie, Duncan didn’t think Ed would take it wrong if he told the man the truth.

Duncan paused at Ed’s shoulder and met his questioning stare. “Women don’t appeal to me,” he explained, between them.

Duncan nodded. “I was surprised to see your friends so open about it.” Even seeing Ashley and Demaris together kind of took him by surprise.

“Chris’ family has been in Silo for a long time. Plus, if you saw his brothers…” Ed rolled a shoulder. “He can handle himself, but one thing I’ve noticed about Silo over the years—they don’t want exclusion of any kind.”

Duncan studied the leash, dying to ask the question burning the tip of his tongue. The world seemed to vanish, all of Duncan’s attention fading to a bubble that encircled him and Ed. The more they talked, the more he suspected Ed was gay too, but he sincerely doubted Ed was the kind to be dominated. All that muscle… He couldn’t help the dryness in his throat as he battled with himself and his own awareness. Duncan hadn’t let himself look at Ed too deeply, hadn’t allowed his interest to gain a foothold, but now, standing beside him, talking to him without the tension of the day they’d met between them, Duncan’s blood was growing heated, his skin tingling with desire.

Duncan hadn’t been involved with anyone since his discharge. Being around Ed was beginning to make him wish he were. 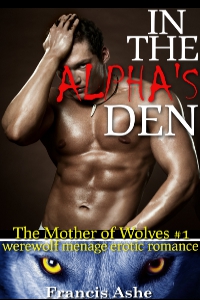