Heart of the Queen

Forced to work among mortals for financial reasons, Hera embraces her childbearing skills and becomes a midwife. Living in Vermont with the mortal identity of Heather Juno, she meets two stunning men through a client.

But Hera is reluctant to get involved with either man after her ex-husband spent thousands of years cheating on her.

Veterans of the Iraq war, James and Noah are used to fighting for what they want, and they are not about to give Hera up.

They are ready to battle for The Heart Of The Queen. 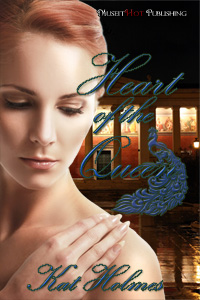 Heart of the Queen

James looked at Noah and thought again how lucky he was to have made it out of Iraq alive, and then to get this sexy, wonderful man as his lover. Noah stood six feet tall with ice blond hair and pale green eyes. Always smiling, Noah could melt anyone with his grin. Quite a fair share of women had fallen for his charms. Noah was a perfect contrast to the darker, more serious nature of James. Contrary to what people thought, James and Noah were not gay. They were bisexual and loved women just as much as they loved each other.
Content together, James and Noah knew they wanted—no, needed—a woman to complete their family. They wanted a woman to share and to love them both and only them. They’d been involved with plenty of women who liked the idea of a kinky one-night stand, ménage fantasy, but none who wanted them forever. James and Noah wanted one woman forever.
Pulling Noah up, he kissed his lover. He loved the feel of Noah’s body, all hard angles and muscles, pressed against his own. He needed to return the favor. Reaching into his nightstand, James pulled out the bottle of lubricant they always kept there. Handing the bottle to Noah, he turned over onto his stomach. He moaned as Noah’s hands ran down his spine.
“Don’t tease me Noah,” James growled. “I want you inside me now.”
“So impatient,” Noah said, a smile evident in the sound of his voice.