Kathryn Avinger is a werewolf, daughter of the North American Alpha. Young, beautiful and obedient to her Alpha’s will, Kathryn was married off ten years ago to a much older and wealthy human, finding herself neatly trapped in an abusive prison of money and privilege.

Renjiro Roesner is a powerful and charismatic wolf, an enforcer for Kathryn’s father … and, once upon a time, Kathryn’s promised husband. Returning from a mission to find Kathryn married and gone, Renjiro left the country, bitter and betrayed. But when someone tries to murder Kathryn at her husband’s funeral, Renjiro comes home to protect the only woman he ever loved.

Racing against time, their long-simmering passion flaring hotter than ever, Renjiro is determined that this time Kathryn will be his. But first, he’ll have to keep her alive long enough to claim her. 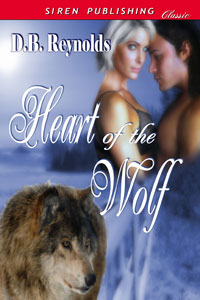 Heat Rating: Sizzling
Word Count: 24,179
25 Ratings (4.3)
Paranormal Vampires/Werewolves
In Bookshelf
In Cart
In Wish List
Available formats
PDF
HTML
Mobi
ePub
Cover Art by Jinger Heaston
Reviews
Loved it ... am a great fan of D.B. Reynolds
Ice
I thoroughly enjoyed Heart of the Wolf but wish there could have been more interaction with her father. The main characters were well drawn with great dialog.
Thanks for an enjoyable read. Love ALL your books.

4 CHERRIES: "Wolves have never been so tantalizing as they are in this book. D.B. Reynolds has made it easy to understand her version of werewolves by creating a world you can follow through a steady plot line. If you love wolf shape shifters you will love this book. It's got just enough sex to keep you happy but not so much that you lose yourself in nothing but sex. This book is well worth the 4 cherry rating." -- Sweet Pea, Whipped Cream Reviews

"As Kathryn Avinger watches her abusive husband’s casket lowered into the ground she can finally see freedom in her future. Kathryn was given to her husband as part of a deal he made with her father the North America Alpha. After ten years of suffering under the hand of a madman, Kathryn breathes a sigh of relief for about two minutes. It seems she has landed on someone’s bad side. As she returns to her limo a bullet with her name on it comes flying at her. Renjiro Roesner has spent the last ten years in Europe enforcing for Kathryn’s father. As the North American packs enforcer, it’s his job to fix the wrongs. When a hit is put out on Kathryn, Renjiro is sent to protect her and find the culprit. That might not be such a hard task if he wasn’t still in love with her and pissed. Renjiro left years ago thinking he and Kathryn would be together forever only to come back and find her married. This led to his long stay in Europe. Is it possible for Renjiro and Kathryn to mend what’s broken between them? Or are these mates destined to be pulled apart again, this time by death? Heart of the Wolf is one reunion tale you won’t want to miss! Kathryn and Renjiro are filled with scorching chemistry and plenty of fiery attitudes. These two fierce warriors didn’t just fall into bed after their long coming reunion. I thoroughly enjoyed their seductive dance that forces them to face the past that tore them apart and the dangerous present that has brought them back together. Heart of the Wolf is a hot and spicy novella." -- Miranda, Joyfully Reviewed

Kathryn closed the door with a firm click, pausing for a long moment, her back to Renjiro and everything he stood for.

She turned then, her eyes scanning him from head to toe, drinking in the sight of him. She’d loved him so much. Her heart squeezed in her chest, mocking any pretense that her feelings had changed. She loved him still.

Ren’s expression had shifted, all of the raging emotion of only moments before now carefully shuttered behind unreadable black eyes.

“A friend of your father’s?” he asked softly.

“He is the Alpha.” The capital A was clear in the way he said it.

“He is my Alpha,” Ren ground out from between clenched teeth.

Kathryn laughed despite herself, her lips curling into a small, satisfied smile. Wolves like Ren never submitted easily.

One corner of his mouth lifted briefly, acknowledging her small victory, his black eyes sparking with sudden pleasure. He met her gaze and the laughter washed away, replaced by something far more intense, something that stole her breath and tightened things low in her body. He held out his hand.

She stared at him, her gaze switching from the wolf now peering out from behind his eyes to his broad palm and back again. She raised her hand slowly, her fingers trembling until she steadied them with an act of sheer willpower.

His strong fingers closed over hers, mindful of his strength and so careful as he tightened his hold until he was pulling her gently into the curve of his arm, the swell of his chest. Kathryn swallowed a sob of relief as his arms came around her, as she felt safe for the first time in longer than she could remember.

Ren sighed, his breath running out in a long, slow exhale as if he’d been holding it for hours rather than minutes. “Kathryn,” he murmured.

She’d dreamed of this moment for months after her marriage to Preston, dreamed that Ren would find her somehow and save her. But he never had. And she’d learned a hard lesson, not to count on anyone but herself. She pushed lightly against his chest, not trusting herself to remain in control with him so close. “I can’t—”

She sighed, feeling her wolf deep inside preening itself with pleasure. Her wolf knew what she wanted whether Kathryn did or not.

She couldn’t have said how long she stood there, Ren’s heartbeat strong beneath her ear, his heat and strength surrounding her. She stirred at last, not because she wasn’t comfortable, but because she was.

“Why are you here, Ren?” she asked, trying to regain some distance. “Marla said you’re with the police?” She knew that couldn’t be true but wasn’t surprised he’d told Marla and Tommy it was.

“I’m here to help you. To find out who’s behind this and stop them for good.”

She frowned and stepped back even farther until she could look up at his face. “I thought you were living in Europe?”

Kathryn stiffened and pushed completely out of his embrace, putting distance between them. He let her go, his arms trailing away, his hands lingering until she backed out of his reach.

“My father?” she demanded.

Ren shrugged, eyeing her curiously. “He called me back to the city a few days ago. I didn’t know why, but then I saw the funeral video on the news last night.”

She turned her back on him and walked around the desk, wanting to put something physical and solid between them.

“Why would my father—”

“I told you, I don’t know. But now that someone’s tried to kill you, Dom’s worried and he wants me to check into it.”

Kathryn’s heart, so recently warmed, froze instantly. Ren hadn’t come home for her. This was just more of her father’s interference, maneuvering to control her, using her in his games of power. She should have known better. She did know better. Ten years with Preston had taught her to guard every emotion, to give away nothing for free. If it had been anyone else, anyone but Ren, it never would have gotten even this far. Something her father had no doubt counted on.

Ren woke to find his arms full of naked warm female, and not just any female, but Kathryn. He buried his face in her neck, breathing in her scent, filling his hands with her soft, full breasts, rolling her rosy pink nipples in his fingers until they were hard and begging to be tasted.

Kathryn sighed in her sleep, covering his hand with hers and wiggling her firm ass as she tucked herself deeper into his embrace. Ren’s body immediately responded, reminding him of all the delicious things one could do with a welcoming, warm woman on a lazy winter morning.

He grinned and curved his hand over Kathryn’s hip, rubbing himself lazily against the firm globes of her butt. His shaft responded eagerly, growing harder and longer, slipping down into her crease and between her legs until his tip touched the moist heat hidden there.

Ren hummed with pleasure and began to thrust slowly, sliding his hand down to her thigh and pushing her leg forward, opening her to his sensuous intrusion. She was still wet from her last orgasm, still as hot as she’d been when she screamed his name and raked open his back with her claws. He rolled the muscles of his shoulders, feeling the pull of healing wounds. He smiled and flexed his hips forward, sliding deep into her tight little body.

Kathryn murmured softly in her sleep and began pressing back against him in time with his thrusts, making love to him even before she was fully awake. He caressed her belly, sliding his hand down between her legs and burying his fingers deep into her silky, swollen folds until he found her clit, already hard and eager for his attention.

He pinched it gently and Kathryn came fully awake, gasping his name. “Ren!” She moaned wordlessly, rippling her body against him. “How come you still feel so good?”

“Because you do, sweetheart.”

“You started it,” she sassed back at him.