College sophomore Jace O’Dell is looking for fun and adventure during his summer hiatus after a long, demanding semester and cumulative finals, so he auditions for SUNY Plattsburgh’s summer production of William Shakespeare’s A Midsummer Night’s Dream.

Jace is in luck. When he earns a role in the play, he finds more than an adventure waiting for him behind-the-scenes. Black, muscular, intelligent, and charming football jock Germain Bridger captures Jace’s eye.

As a record heat wave assaults the city of Plattsburgh, Jace and Germain find refuge from the threatening temperatures, escaping to the refreshing waters of Lake Champlain, the local movie theater, and a car ride to one of Jace’s favorite summer getaways.

A promising friendship develops into an intimate exploration between the two as emotions are shared and tested, and true feelings revealed.

Before Jace left the Myers Fine Arts Building, he detoured into the men’s restroom in the main lobby.

At the sink, the water running lukewarm in the palms of his hands, Jace splashed his face. He heard foot traffic, and animated voices, snickering, talking, laughing in the hallway.

Staring at himself in the mirror, he realized how much he resembled his father. Goatee. Long, bony face. Chocolate brown eyes.

Then the door to the restroom swung open on its raspy hinges.

Startled, Jace looked up at Germain standing in the doorway. Germain clicked his tongue, winked at him over a playful grin, and said, “Hey you. What’s up?”

At the sight of the beautiful black boy, Jace froze, speechless, his mouth agape, his hands immobile beneath the running water.

Bobbing his head up and down and mumbling to an imaginary beat in his head, Germain sauntered to one of the three urinals on the far wall. “Rough rehearsal tonight?” he asked, unzipping his shorts. The sound effects of a zipper being tugged upward roused a sexual image inside Jace’s head.

“That’s the understatement of the evening.” Jace raised his eyes up slowly and snuck a peek at Germain in the mirror. The six-foot theater technician wore a grey tank top, his Red Sox bandana, athletic shorts and Crocs. Beneath the thin fabric of his shirt, knots of muscle mapped his solid structure. Sweat stains dotted patches of the worn t-shirt.

Jace watched as Germain shook himself, and yanked the urinal’s valve all in one swift motion. As Germain turned to him, Jace dropped his eyes quickly to his cupped hands under the gushing water. He reached for the soak dispenser, filled his palms with the disinfectant pink soap, and lathered his already clean hands.

Walking up beside him, Jace felt the heat radiating off Germain’s body. Reaching for soap from the same dispenser, Germain brushed his arm innocently along Jace’s, and asked, “What are you doing tonight? Any plans?”

Jace shut off the tap and, dripping wet, reached to his left and tore a sheet of paper from the dispenser. Wiping off his hands, he said, dryly, “I’ve got a date with a script.”

Germain smiled and inhaled, his chest heaving. He reached over Jace’s shoulder and yanked a piece of paper towel from the dispenser, their shoulders slightly touching each other’s.

Stepping back, Germain leaned up against the sink and folded his arms across his chest. Grinning, he asked Jace again, “Come on. My treat.” 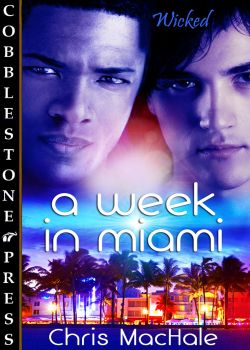