Heaven in a Matchbox (FF)

Lovers Regan and Emmeline are the sole survivors in a post-apocalyptic world. They roam freely through the deserted cities in Great Britain, scavenging what they can, trying to survive in a world that is no more than ash.

After a quarrel, Emmeline goes off on her own. But with Regan’s mind being on the verge of insanity, will a little accident mean the end for both women? 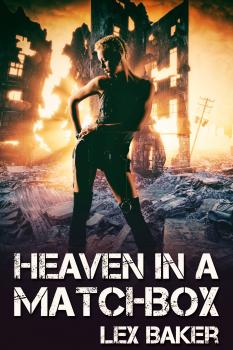 Heaven in a Matchbox (FF)

Regan reached for the tin can and read the label. Chicken of the Sea Chunky White Tuna In Water. The writing was squidged around a woman with yellow hair and no legs. Regan knew then that it was all made up. There was no such thing as yellow hair.

She announced, We have been eating this for years and years!

Well, we found a palette of it two days ago, remember?, said Emmeline patiently, We eat whatever tinned food we find.

Regan announced that she was fed up with tinned food. Emmeline said, Tough, because tinned was the way food came these days. Regan still refused to go on eating. Emmeline pulled the face she pulled when she was tired, though it was hard to tell sometimes whether Emmeline was tired for lack of sleep or tired of the situation, of life, or, well, of Regan. Then she announced she'd go for a Treasure Walk by herself. Regan didn't want her to leave, she complained that they had planned to read Lovecraft together, and then Emmeline said Regan didn't even like Lovecraft, and then Regan asked what Emmeline needed to go on a walk for when there was nothing to see out there except blackness and death and chaos and bloody tinned food, and then Emmeline just stared at her, and then she left, and now Regan was all alone.

So she crouched on the sofa, wrapped up in Emmeline's night gown, and pouted in silence for exactly two-thousand twenty-seven heartbeats.

I have sat with you for two-thousand twenty-seven heartbeats, she told the sofa.

By way of a reply, the charred piece of furniture left a black smear on the gown.

Then Regan read Lovecraft out loud, but it made her feel more miserable. She missed someone telling her to shut up and get on with it when she stopped to comment on the strangeness of the story. Then she went upstairs, stood on the bed, and played the violin until the sun turned orange.

When she came back down to set fire to the kitchen table, she thought she heard something.

Impossible, she told the coat rack. When They came, They took away all the noises. They made so much sound that it drowned out everything else; consequently, when they went away again, there was no sound left in the world. Consequently, there could only be quiet.

And yet there was a noise.

Regan jumped to the window that overlooked the long, wide street and yanked the planks open that covered the hole in the wall. There was the noise again. It was something shouting in the distance. Or maybe so close by that it only sounded as if it were very distant. There was life out there! She wasn't alone! There was a woman out there with yellow hair and tinned food and she was shouting for help. Wasn't she? Regan racked her brain. It must be something else. There was a memory that knocked on her mind, the memory of a kiss she had shared with someone not so long ago. The woman had blazing hair like a sunset and she had fiery eyes and freckles on her nose and her name was Emmeline. Emmeline! The name brought with it a flood of memories.

I don't live alone, she told the fire pit they had set up in the middle of the room, I almost forgot Emmeline!

She took off the nightgown and ran downstairs. Then she rushed upstairs again to put the nightgown back on. It was cold, and she had forgotten that she was naked.