A bittersweet short story about a lifetime love affair. Henry and Jim have spent a life in love, from the very first date arranged by Henry's sister, through the rocky times they worked to make ends meet, and into their twilight years.

Old men now, Henry reminisces about the love they've shared as he learns to cope with Jim's fading memory and his own fear of being forgotten by the only man he's ever loved.

NOTE: This story appears in the anthologies "Best Gay Romance 2008" published by Cleis Press and "Best Gay Stories 2009" published by Lethe Press, as well as in my print collection "So In Love."

Boyz Magazine:
"J.M. Snyder's exploration of love and memory [is] wonderfully emotive and you may well find yourself shedding the odd tear."

Fallen Angel Reviews: 5 out of 5, Recommended Read.
"Thanks ... for this incredible story. It is one that I will cherish."

Gazette Tampa Bay Magazine (April 2008 issue):
"What's marvelous about ["Henry and Jim"] is that the reminder is there, wrapped around carefully-composed prose, that romance ... survives and flourishes."

Obsidian Bookshelf:
"A beautifully written short story that shows that a marriage isn't necessarily defined by the gender of the participants. These two men have had a long and loving marriage that has been more successful than most marriages."

Review by Elisa Rolle:
"This is one of the most beatiful short story I have ever read ... This is not a story of two young men in love, this is the story of two very old men, but still in love, and this is the most wonderful thing of all ... Absolutely recommended."

Reader Review by LouisaClark:
"Snyder writes their story in a way that's not depressing. This is a beautiful love story and a reminder that it's the simple things we do that makes life so special."

Romance at Heart:
"A story of love, hope, trials, togetherness, and acceptance ... a must read for all who enjoy a good, well written but short gay romance."

Two seats, a dime apiece, and Jim chose one of the last rows in the back of the theater, away from the shrieking kids that threw popcorn and candy at the screen. He waited until I sat down, then plopped into the seat beside mine, his arm draped casually over the armrest and half in my lap. "Do you bring Betty here?" I asked, shifting away from him. Better to bring my sister up like a shield between us in the drowsy heat and close darkness of the theater to remind me why I was there. Betty trusted me with her latest beau, even if I didn't trust myself.

Jim shrugged, uninterested. As the lights dimmed and the film began, he crossed his legs, then slid down a bit in the seat, let his legs spread apart until the ankle rested on his knee. His leg shook with nervous energy, jostling the seat in front of him and moving at the edges of my vision, an annoying habit, distracting, and when I couldn't stand it any longer, I put my hand on his knee to stop it. As if he had been waiting for me to make the first move, Jim snatched my hand in both of his, threaded his fingers through mine, and pulled my arm into his lap. "Jim," I whispered with a slight tug, but he didn't seem to hear me and didn't release my hand. I tried again -- he just held on tighter, refused to acknowledge that I wanted him to let go. Leaning closer so I wouldn't have to raise my voice, I tried again. "Jim --"

He turned and mashed his lips against mine in a damp, feverish kiss. I shouldn't -- my mind started, then I can't, then Betty. Then his tongue licked into me, softer than I had imagined and so much sweeter than a man had the right to be, and I stopped thinking altogether. I was a whirl of sensation and every touch, every breath, every part of my world was replaced with Jim. Betty isn't getting him back; that was my last coherent thought before I stopped fighting him and gave in.

Later that evening, my sister was waiting when I got home. "Well?" she wanted to know.

I shrugged to avoid meeting her steady gaze. "Do you really think he's right for you?" 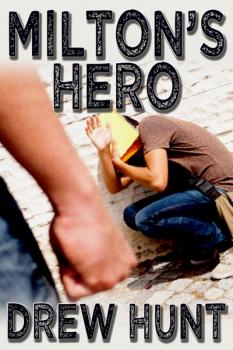