COULD SHE REALLY FIND THE RIGHT GUY ON THE INTERNET?

"Hot, luscious woman who can suck a golf ball through forty feet of garden hose seeks rippling-ab'd firefighter who has a tongue that thrums like a hummingbird and enjoys painting my toenails and eating Ben & Jerry's out of the carton while watching Orange is the New Black."

Curvy financial analyst Laura Michaels stared at the online dating site's registration screen and frowned. That's what she really wanted to write. By the time her best friend, Josie, edited and clicked "Send," her personals ad was more fantasy than reality.

OR WOULD SHE GET MORE THAN SHE BARGAINED FOR?

When two different guys -- Dylan Stanwyck and Mike Pine -- replied within two days, she seemed doubly blessed. After a first date with model-turned-firefighter Dylan that ended in bed -- and with a huge misunderstanding -- Laura came home from her Walk of Shame to an invitation for a hike with ski instructor Mike. The Great Outdoors became the setting for so much more...

Caught between two men -- literally -- who turned out to be roommates and secret billionaires, Laura makes a startling discovery about her own capacity for passion. And, maybe, long-term love in an unconventional romance with two men that pushes every boundary. 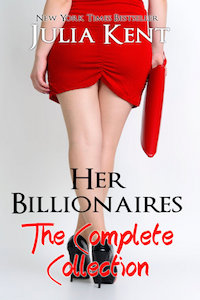 Dylan Stanwyck couldn’t quite believe what he saw when he logged into the online dating site. Four months of weeding through so many crappy profiles had jaded him. Finding the right woman would be like coming across the proverbial needle in a haystack, but in this case he didn’t want to face any pricks.

And yes, women could be pricks. So far he had been inundated with requests to chat, and he knew exactly why. Being a firefighter who competed in weightlifting competitions for fun, along with the occasional mini triathlon, made his pictures look quite nice. The problem with the women who were responding to him was that they were also the type to be drawn to appearances only. It seemed so shallow of him to think it, but sometimes being built the way he was could be a curse.

Curse of the Jersey Shore chicks. Because that was the type who seemed to seek him out, like moths to a flame. A trashy, Snooki-like flame of ho-dom. When he would meet up with these women he found himself in some alternate universe, where they licked their lips and offered themselves up in the alley behind the nice tapas restaurant where he liked to take women. A few goat cheese stuffed dates and pitchers of sangria later and he was being humped up against a slimy brick wall next to the trash cans.

And when he turned them down...he still had scars from one woman’s long, overdone nails raking his neck as she screeched, “You don’t know me!” over and over, as passersby gawked, took pictures they probably uploaded to Reddit, and mercifully called 911 when it became evident he required police assistance.

So when this new profile for Laura appeared, he peered at the description and leaned back in his chair, taking a deep breath. Cute. But not too cute. A little sassy. He liked sassy. He ran a hand through his thick, wavy hair. Time to get a haircut, dude. You look like a survivalist. And smell like one, too, he thought as he studied her picture and caught a whiff of himself. His morning run was done, 3.8 miles logged on his online fitness program, and he reeked.

She looked like a 1940s pin up girl. A little plumper, with soft curves to her shoulders, a fuzzy, lime-green sweater accentuating her breasts. Her jaw line seemed firm and gentle all at once, and what appeared to be naturally-blonde hair was swept up off her face in a pony tail. His mom would call her a “corn-fed farm girl” and those lips – lush and grinning a half smile that seemed to say “Kiss me, Dylan.”

She's Mine (MF)
Sam Crescent
In Shelf
$3.99
Tweets by
sirenbookstrand