“I made some calls to Dallas PD about the shot fired at your concert.” Aaron opened the file he’d prepared on Gya. “No one has been arrested and they have no viable leads. Whoever fired at you, Miss Gaynor, is still on the loose.”

“You have the job, Mr. Strait. Please cut the sales pitch.” Gya folded her arms over her chest in a clear act of defiance, which only made her look even more gorgeous. She was the most beautiful creature he’d ever laid eyes on, though clearly quite the bratty diva. “Stephanie has convinced me that you are needed, but I want to make sure we’re getting our money’s worth out of SCSS. Tell me what you and your brother can do for me that local officers aren’t already doing.”

Stephanie leaned forward. “Gya, don’t be rude. These men are here to help.”

“I’m not being rude. I have a right to know what I’m paying for.”

He saw Kyle smile. It didn’t take a mind reader to realize his brother was attracted to Gya, too. No wonder. Despite her sour attitude, she was stunning. “My team of investigators is already checking every possible lead to identify the shooter. We already have a short list, which includes some pretty shady characters. I know you are aware of Vincent Scarpelli. He’s just one of several of your fans that needs to be checked out thoroughly.”

“We’ve read the message boards on your fan page, Gya.” Kyle pointed to the dossier. “We need to dig into the people who posted some of the more delusional sounding ones. Seems you have quite a number of possible stalkers.”

“I’m famous. All of us have stalkers, Mr. Strait. Just ask Selena, Taylor, or Uma.”

“Maybe so, Miss Gaynor, but this isn’t something to take lightly.” Kyle was being too soft with her. “Please call me Kyle.”

Gya rolled her eyes, making Aaron want to flip her over his knee and paddle her ass.

It’s time for this little diva to get the message. He stood, gathering up the dossier. “Perhaps this isn’t the job for us. It’s clear you do not have confidence in SCSS’s abilities. I’m sorry about that.” He turned to her agent. “I can suggest some other agencies that—”

“Hold on.” Gya jumped up to her feet. “I didn’t say that. I’m sure you are quite capable.”

“Are you sure?” He loved the fire in her eyes and the red in her cheeks. “Because if we do this you will do exactly what I say when I say it. There will be no questions or arguments.”

“I thought I was the client, not the other way around.”

“You are the client. If you’re not willing to do what I know is best, then it’s time for us to go. If I stay, it’s my job to keep you safe. So let me repeat how this will go down. You will do what I say without pushing back, complaining, or trying to get your way. I know what’s best. Always. Am I clear?”

“Very.” Her eyes held defiance but her arms fell to her side, a sign she was beginning to surrender.

He knew he hadn’t won the war with her but he had won the battle. For now. “You’ll be getting twenty-four hour protection from two of my agents.”

She shook her head. “Before I sign on the dotted line, I have one request, if you don’t mind, Mr. Bodyguard.”

Out of the corner of his eye he saw Kyle grin again, which kept him from walking out the door at her insolence.

A million thoughts rolled through his head. The news that he’d learned at the appointment with his doctor this morning. Kyle’s face at their mother’s funeral years ago. The promise he’d made to Maude after her hotel burned down. His brother’s future hung in the balance of what he did next.

So instead of leaving, Aaron turned to the sexy celebrity. “I’ll give you one request, Miss Gaynor. That’s all.”

She sighed and the anger in her eyes softened. “Thank you.” Even her tone mellowed. “Let’s see. How can I phrase this so I actually get two requests in one.”

Resisting the urge to smile, he looked directly at her. “I’m waiting.”

“Okay. Here it goes. Please call me Gya, and I want you and your brother to be the ones guarding me. You said it yourself. This is serious. Who better than the owner of SCSS and his brother to protect me?”

Kyle laughed. “We have to sleep sometimes, Gya. We’re not superhuman.”

“That’s fine, but I want you with me.” Gya’s face got even redder. “I mean…I think Stephanie would feel better if you were close at all times.”

Aaron held up his hand. “Sit down.”

Gya planted her pretty ass back in the chair. God, she would make the perfect little sub with the right training.

Gya gazed at Aaron, who stood and slowly, methodically removed his black boxers. He’s giving me a show, and what a show it is.

Sitting up in the bed, she grinned. “I’m glad you finally got naked.” She glanced down at his monstrous, hard cock.

He sent her a wicked wink. “Tell me what you see.”

He pulled his boxers back up to his waist. “I expect you to listen and to obey when I speak. Remember what I told you?”

She nodded. He’d made it very clear in every word, demand, and caress that he was fully in charge in the bedroom. Something inside her responded to him, allowing her to just be and let go. I don’t have to worry about a thing for the first time in my life. It felt amazing and safe.

“Okay. If you take them off now, I will tell you what I see. I swear.”

“Excellent, baby.” Unlike earlier, this time he quickly shoved his boxers to his ankle.

Her eyes zeroed in between his legs. “I see the most gorgeous dick in the world.”

She giggled. “That’s what I said before. I guess I understand what you mean now. In fact I think your cock would be award-winning if there were that kind of contest.”

“I thought men were obsessed with their own cocks, but you, my dear, seem completely smitten by mine.”

“I am,” she confessed. “Don’t most men name their cocks? Does yours have a name?”

Laughing, he shook his head. “I’m not like most men. My cock is nameless.”

“Not any more. I think we should call it…umm…Atlas. Yes. That’s it. A Greek god. That’s what your cock reminds me of.”

“Seriously, I can’t take my eyes off of you.”

“You mean you can’t take your eyes off of Atlas, don’t you? My beautiful, gorgeous cock. Keep going, baby.”

His eyebrows shot up and his breathing deepened.

“Did I say something wrong?”

He shook his head. “No, baby. You said everything just right. Come here and bring a pillow with you.”

Obeying him, she crawled out of the bed. She handed him the pillow.

Even though they were both naked, standing next to him she felt completely exposed and so very feminine, while he appeared powerful and so very masculine.

He placed the pillow at her feet. “On your knees, sweetheart.”

Tingling like mad, she nodded, dropping to the floor. Though she was thirsty to taste him, she didn’t make a move, believing he wanted to give her his permission first.

She wasn’t sure what he meant by that, but his tone told her whatever he saw in her he liked, which filled her with pride. “Thank you. So are you.”

“A natural born lover. I’m burning up inside and you’re responsible for all of it.”

He bent down and touched her cheek. “My God, where have you been my whole life?”

“Waiting for you, though I never knew it.”

He inhaled deeply and then pressed his lips to hers, making her dizzy and causing her toes to curl.

With her lips still throbbing from his kiss, she looked into his blue eyes. “Not that I’m trying to take charge, Aaron, but isn’t it about time you let me touch you?”

He smiled. “Knock yourself out, baby. Be my guest.”

She giggled. “Thank you.”

Wrapping her hand around his shaft, she licked the tip of his cock. “Mmm.” Tasting him on her lips gave her a nice little shiver.

With her other hand, she explored his body, moving her fingertips over his muscled thighs and six-pack abdomen. She bathed his cockhead with her mouth, stroking his shaft up and down. He grabbed her by the hair, tugging on her locks just right.

She parted her lips and slid them down his shaft, taking in as much of his thick cock’s length as she could. He’d given her an incredible orgasm with only his mouth, and she wanted to do the same for him.

Sucking hard until her cheeks hollowed out, she bobbed up and down his dick several times. She could hear his breathing deepen. Her desire for him to be inside her was exploding throughout her body, and her pussy got even wetter.

She wrapped her arms around his legs and increased her tempo on his cock.

Suddenly, she felt a quick tug on her hair.

“Stop, Gya.” Aaron’s voice sounded more like a growl than words, and the impact on her was instant.

She obeyed, waiting for him to tell her what to do next.

“I want to come inside you.” He grabbed a condom out of his nightstand and rolled it down his shaft.

Mesmerized by him, she felt the pressure inside her expand and multiply. She desired him, needed him, had to have him.

He picked her up, placed her back on the bed, and got on top of her.

Being underneath him was exactly where she wanted to be. He was in control. She was his to do with as he pleased. 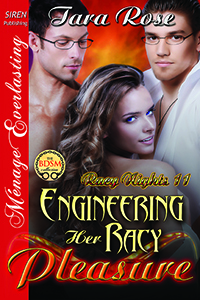 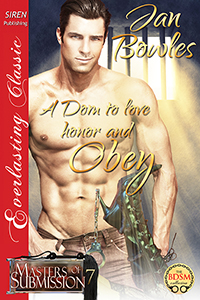 All or Nothing (MFMM)
Becca Van
In Shelf
$5.50
Tweets by
sirenbookstrand