Sammy has sworn off men—after all, her now ex-boyfriend Greg tried to kill her. So she's vowed never to become involved with one again. But how about two?

Brock and Slater are both keen to help Sammy mend her heart and change her mind. As shifters, they know instinctively that Sammy is their mate for life. Still, if Sammy is going to risk loving again, she's going to set some ground rules. But the road to mate-hood is paved with difficulty, and trust needs to be earned as new information comes to light about the deadly Shifter-Killer.

Can Sammy learn to trust Slater and Brock? And when Sammy’s ex-boyfriend is released from jail, will she go back to him or fight for what she now has with her two shifters?

Heat Rating: Sextreme
Word Count: 50,880
14 Ratings (4.5)
Menage a Trois/Quatre Rubenesque Shape-shifter
In Bookshelf
In Cart
In Wish List
Available formats
ePub
Mobi
PDF
HTML
Cover Art by Sour Cherry Designs
Reviews
I love bear shifters so this book was a very good read for me. I love it.
rhondavb
Best book in the bear series. Totally loved it, Brock & Slater are my fav bears of all time!
AussieGirl
Read more...

More From The Bears

Shifters were usually very bossy with their mates, especially alpha males like Slater and Brock. The two of them never gave up, but when she’d asked for time, they’d given it, and if she asked them to leave they left. They’d never pushed her to do something she hadn’t wanted to. They hadn’t even whined that she wouldn’t let them claim her.

Sure, they joked and vied for her attention, and no matter how many times she said she wasn’t interested they came back to try again. They never got angry, and they had been there when she had broken down outside the hospital when Sandy got hurt because she’d learnt who the shifter killer was. Sammy felt it was her fault. Sammy remembered Brock was furious, but he never let her see it. It was only when she snuck looks that she saw the pure rage and anger at her situation. Brock was gentle with her and told her pretty much the same as what her psychiatrist told her.

Sammy remembered Slater and Brock let her be for a while after the shifter killer mess. Slater had come around only twice to check on her, and Brock had checked on her once. They didn’t come together. It was good. She had almost two months of time to get herself together until they slowly started coming around again and calling her. She should give them a chance. Sammy was extremely attracted to them. They made her laugh, and she always felt good around them. Not to mention her body came alive without even touching them. They always told her how beautiful she looked even when she knew she looked like shit.

Arms came around her waist, and warmth settled through her. Honey and chocolate wafted through her senses, and she felt safe.

Brock leaned down and whispered in her ear, “Quick, let me hold you and talk to you. Please, protect me. My mother is on her way with one of the Brown girls. I’ve told her I don’t need setting up, that I have you, but she doesn’t believe me.”

Sammy felt a sting of jealousy course through her at the fact Brock’s mother didn’t believe she was his mate and was trying to set him up with someone else. Brock nipped her neck sending delicious shivers down her back. He then soothed her with kisses.

“Don’t worry, angel. I’m all yours. No need to get jealous.”

Stupid shifter senses. Her feelings weren’t even private. Brock dodged her elbow and pulled her tighter against his chest as the woman she’d met briefly at the bridal shop the other day came over to them with a tall, stunning, brunette.

“I told you, Mother. I already have a mate.”

Sammy watched as Adele raised her eyebrow in the most regal way. “I do not see this mate you have been talking about, and if you’d mated her she should be here. She hasn’t come and introduced herself, and you don’t smell mated. So frankly I think you’re just being stubborn and making excuses to get out of things. I think your mate is make-believe.”

Sammy told herself to stay quiet, to stay invisible and not say anything, but she was sick of shrinking into the background. Before Greg, she would never have put up with someone treating her like this woman was now. She wasn’t make-believe. She was Brock’s mate whether she claimed him or not.

Taking a deep breath she told herself that Adele couldn’t do anything to her with Brock so close, and behind them there was a room full of shifters and humans. “Hi, Mrs. Bear. I’m Samantha. We met at the bridal shop the other day. I’m one of Sandy’s bridesmaids.”

The penetrating stare Adele had been giving Brock moved down to her. “I remember you hiding in the corner. Is my son bothering you? Has he put you up to pretending you're his mate so he can get out of events and things I’ve organized? You can say no, and I’ll make sure he doesn’t bother you again.”

Sammy stared dumbfounded at the woman. This was the woman Susie loved? Sandy had told her to watch herself with her. That this woman was amazing the way she worked. On the one hand Adele had given her an out, but on the other, Sammy knew she’d just been snubbed. Adele didn’t think she was Brock’s mate.

Sammy felt Slater come up beside her, and he reached for her hand.

“Adele. I see you’ve met our pretty little mate.” Slater held the hand she wasn’t holding out to Adele. “Stella, it’s nice to see you again.”

Sammy put her hand down and watched as Adele turned red, and her back went rigid as she plastered a fake smile on her face. “Slater, it’s nice of you to lend my son your mate to play this game. And I’m glad you’ve met Stella before. You can tell Brock what a wonderful woman she is.”

“I beg your pardon. You have to be wrong, young lady. If you were their mate you would be claimed by now. My son and Slater have known you for months.”

Adele took a step towards her, and Sammy almost jumped out of her skin as she heard two deep growls, one behind her and one next to her.

“Stay where you are, Mother. I will not even let you touch my mate. And if you do I won’t be as lenient as Jake and Zack.” Sammy could hear the deadly steel in Brock's voice.

Adele’s head shot up from staring daggers at her to look stunned at her son. “I have only ever wanted the best for my children. I don’t think this tiny, fat human is the right choice. One human daughter-in-law I can handle. Two, I’m stretching, but three is too much to pollute our good genes. I think you need to think real hard on your future.” And with that Adele turned and strolled away.

Wow. What a bitch. Maybe being with Slater and Brock was a bad idea. God, who would want that for a mother-in-law? 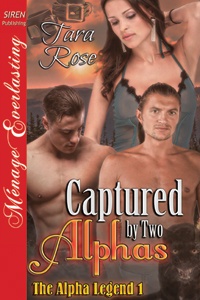