Dragons annihilated civilization some ten generations ago. A few Crossbreeds, humans born with dragon-like characteristics, now lead opposing tribes who still battle for dwindling resources. Rhone’s wings have been stripped from his body, his family killed, and his hopes of leading the Mountain people away from the constant threat of marauders destroyed. Ketta’s life has been full of pain and anguish. Her brother rules her and the Lax tribe with a bloody fist. Tired of the violence, Ketta takes a stand and rescues Rhone from the brink of execution. Armed with knowledge from Ketta’s somewhat addled grandfather, the unlikely pair embarks on a quest to heal Rhone’s wings. Along the way, the couple struggles to find the truth beneath hatred and lies. Desire and a mutual enemy bring them together; mistrust and secrets tear them apart. These lifelong foes will have to fly high above their differences to defeat a deadly dragon and save what’s left of both their tribes. 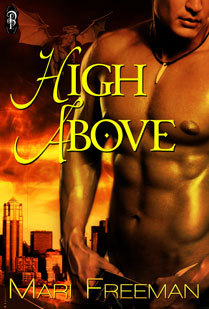 He tried to escape inside his mind, practicing the meditation techniques his father had taught him. Letting his head fall back and closing out Lax and all its inhabitants, he imagined soaring through clean, clear skies, gliding over the ocean with no worry of attack or fear for his tribe. Rhone exhaled completely and willed his body to relax as much as the chains and his position would allow. The wind blew through his hair, whipping over his chest and across the hide of his wings. He and Beal flew together, playing as young boys, hiding from imaginary dragons, and protecting each other from the dangers in their world. For hours they would pretend to be mighty creatures from the stories the old one’s read at night. Their connection so strong that Beal’s life force beat in Rhone’s heart.

Crashing waves roared in his ears sending spray into his face. The scent of something exotic tickled his senses. Vaguely familiar, arousing, and not part of his fantasy flight.

Water splashed his face again, destroying his meditative state. He opened his outer eyelids and turned his head to the side. A woman stood with a bucket clutched in her long, capable hands. From his angle she looked a little taller than him, and her dark hair was woven into a thousand tiny braids pulled together behind her head. Several short twists escaped and framed her face. Her haunting green eyes reminded him of the clearest ocean water. Tiny silver and gold beads pierced the thin cartilage outlining her pointed ears and glinted in the dying firelight.

“I thought maybe I was too late.” She tilted her head and her thin nose wrinkled as she scented him.

Movement behind her back caught his attention. He opened his inner lids and blinked for better focus. His imagination had not been stuck in his flight of fantasy. Wings. Rhone shook his head. Nyx’s sister?