On a lonely country highway, a young travelling salesman runs down a teenage girl. It was an accident. Why she was wandering around on a highway in a pink, formal dress, he can’t imagine. There’s no doubt she’s dead. Fear takes over and he flees the scene, absently taking one of her shoes with him. An old memory, something familiar about that shoe, struggles to surface. As he speeds away from the accident, he thinks his nightmare can’t get any worse, until he sees a pair of green eyes in his rear-view mirror. The shoe and those eyes lead him to a small town where he meets an all too knowing preacher and a sheriff obsessed with the girl’s tragic demise. As Paul digs deeper into the mystery of the girl and her shoe, he comes face-to-face with a dark secret from his father’s past. 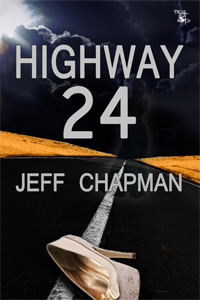 When he stopped beside his open car door, he found his hand still clutched her shoe. He raised his arm to sling it back at the body. Fingerprints. DNA. What more could forensics extract from a shoe? He flung it into the passenger seat, where it landed upright with the tapered toe pointing toward the body on the highway.

The car roared to life as he gunned the engine. He looked up and his hands jerked off the wheel as horror gripped him. A crack no thicker than a hair wove from the top to the bottom of the windshield, a fault line in the glass. A rock, he decided. A rock hit it. That’s common enough. Down the road he sped, just within the limits his shuddering hands could manage. Where to ditch the shoe? A memory hanging out of reach haunted him, something about the shoe, as if he had seen it before. Not that kind of shoe, but that particular shoe. But that was impossible...wasn’t it?

Red reflectors glowed in the distance, flashing brighter as he passed a hatchback sitting on the shoulder. Her car? Nothing to be done. She had jumped on the road. The moment she launched over the hood was seared in his memory. The clunks rang in his head, louder in retrospect, as her head struck glass and metal. He imagined the skull fracturing like a soft-boiled egg, driving splinters of broken bone into her hemorrhaging brain where her dented head bled out.

He closed his eyes and shook his head to clear the sickening thoughts of the death for which he bore responsibility. My God, I’m one of those disgusting hit and run drivers. Aren’t they just pathetic cowards? A dull ache spread across his forehead, warning of an incipient migraine. Think positive, he told himself. Damn, that’s what those inspirational speakers the sales managers always trotted out would say. God, he hated those quacks.

His only comfort was she must have died from the first blow. At least he didn’t make her suffer. No one survived that sort of trauma.

Find a payphone, call it in anonymously. That was the smart thing to do, get out of trouble, but it did nothing to assuage his guilt.

The yellow dashes zipped past him, marking his distance from the accident. A sudden chill shook his innards and inched across his skin, extending its fingers down his back as hoarfrost spreads over a window. The ache across his forehead throbbed. Now, I’m getting sick. He figured he deserved some measure of physical pain. A sweet, heavy scent filled the car. Lilacs? Look back. The urge crept into his thoughts. You’re spooked, he told himself. He forced his mind elsewhere, anywhere but that bundle on the road behind him. He focused on the dark pavement emerging beneath the headlights, watched for the mile markers, anything to resist the habit of glancing at the mirror.

Burnt rubber fouled the air, mixing with the lilac scent. He glanced at the dash to find the temperature gauge read normal. Ignoring the latest smell, he turned back to the endless stream of yellow marks. The acrid odor intensified. The air seemed to crackle with energy. His attention jerked to the rear-view mirror and stayed there.

Two green eyes, rimmed with eyeliner, stared at him from the backseat. A stray, brown curl hung below the girl’s left eyebrow.

“My shoe!” screamed the girl.

Her cry knocked him breathless with flailing fists of anger to his chest.

Paul had heard the phrase “scared to death” before and thought it a myth, until now. He slammed the brake pedal to the floor. His muscles locked, not only with the abrupt slowing of the car, but from seeing that face again.

He hunched forward. For the second time in less than an hour, his car fishtailed, wheels screeched. Twice it spun, a wounded berserker careening down the highway. It lurched to a stop, flinging Paul toward the passenger seat.

He looked to the mirror but found only the empty darkness out the back window. He gripped the steering wheel so tight his arms shook. He knew he should jump out of the car, flee whatever demon haunted him from the backseat, but his hands wouldn’t let go. Too frightened to move, he waited for her to scream, to grasp his shoulder and drag him to hell. Terror sent his heart into overdrive. His head throbbed in time with his heart, a ticking alarm clock. His lungs strained to catch a breath as he wheezed. Hyperventilation hovered mere gasps away. A cutting chill sliced through his core. He thought he was about to die.

The car sat perpendicular to the road, its wheels straddling the center line. As the engine idled, his strength returned and his stiffened muscles relaxed. When he summoned the courage to look in the backseat, he saw nothing of the green-eyed girl. He slipped the gear into park to do a proper search of the car. The lilac and burnt rubber that had overpowered every other scent had vanished. No trace remained, not a whiff.

He righted himself in the driver’s seat. The object of the girl’s anger lay on the floor, upside down in the shadows beneath the glove compartment. He shuddered as he eyed the shoe, which once held her foot, had once soaked up her scent and heat. He reached for it but stopped before touching it. The thing was an evil talisman, he decided, and touching it might bring the girl storming back from whatever world she inhabited. Why did I have to pick it up?