Daniel works long hours cleaning his master’s house, telling himself his lot is better than that of other enslaved humans, who are used for sex or made to endure hard labor until they drop. He’s deemed neither attractive enough nor strong enough to fetch a good price, so his master tolerates him as a house servant. When a human bounty hunter takes a liking to Daniel at one of the auctions, his master sells him without a moment’s hesitation. His fate forever changed, Daniel is handed over to a man who has made it very clear that he expects pleasure and complete submission from his new acquisition…

But the bounty hunter has a secret, and it’s going to change both their lives forever.

Daniel fired but missed. Gaelen fired as well, and the animal roared in pain. Daniel tripped on a rock, and the large cat landed partially on top of him. It dug its claws into his leg, and they both screamed. The animal’s cry made Daniel’s head pound. A flash of movement caught his eye, and blood splashed on his face. He blinked and saw that Gaelen had sunk his blade into the animal’s neck. Gaelen twisted the blade and then removed it before shifting to free Daniel from those claws. Daniel cried out as four spots of pain blossomed anew on his leg.

Gaelen kicked the creature away and then glared down at Daniel. “Fucking idiot,” he said, bending and tossing Daniel over his shoulder without ceremony. He clamped a hand around the wound, which hurt, but Daniel knew he’d done it to stop the bleeding. Gaelen carried Daniel all the way back to the ship, almost two miles. He put Daniel down on a long table in a small room Daniel had never noticed before and gave him a thick rag. “Hold it on your leg. Bleeding’s almost stopped.” He left the room without another word.

About five minutes later, Daniel felt the ship taking off. Another five minutes passed before Gaelen returned. “I scanned the canyon. There was a ship, too small to be ours. And lots of those creatures. We’ll move on.”

As he spoke, he didn’t look at Daniel’s face. He yanked Daniel’s boots and pants off and examined the injury. He sprayed something on the wounds, which began to leak pus. But Gaelen cleaned each wound thoroughly, not seeming bothered by the messy task, and then he began to wrap it up. He then pulled Daniel’s shirt over his head and began inspecting him for other injuries. Daniel sat there, naked, wishing the other man would say something.

Gaelen finally leaned against the table. “Another few inches, and that claw could’ve ripped your gut open.” He met Daniel’s gaze at last. “I couldn’t have fixed that. I would’ve had to run for help and just hope we’d get to you before more creatures smelled the blood. The villagers might’ve even refused to come.”

“I couldn’t leave you.” Daniel sat up a little straighter. “I didn’t do anything wrong!”

Daniel glared right back at Gaelen. “Don’t yell at me just because it scared you. Seeing you facing that thing scared me too.” Daniel had done lots of things to Gaelen in bed the past few days, but he’d never been that aggressive. Now, he grabbed Gaelen by the hair and yanked him close, crushing their lips together. He pulled harder when Gaelen tried to get away, and soon the kiss went molten, the heat between them exploding. Gaelen pushed Daniel down onto the table roughly, fondling Daniel everywhere with one hand while freeing his own cock with the other. He brought Daniel’s face to the edge of the table and fucked his mouth, his hand on Daniel’s neck firm and possessive.

Daniel gagged but took all he was given. He spread his legs in encouragement, and he moaned when Gaelen’s fingers slid into him. Without lube, the invasion was rough and painful, but on some level Daniel needed that right now, felt Gaelen needed it too. Daniel stroked himself, squeezing his balls and clenching around Gaelen’s fingers. Daniel cried out when Gaelen bent to suck him as well. He nearly exploded, but held back so they could come together. The desire to be fucked took over, and Daniel popped off Gaelen’s cock.

“Fuck me! You know you want it.” He circled his tongue around the head of Gaelen’s cock. “Want it bad. I can taste it on you.”

Gaelen grunted and pulled away, first moving Daniel’s legs off the table and then turning him to his stomach. He bent and licked Daniel’s hole, spitting a large amount of saliva into him as he inched back. He held Daniel’s thighs in his hands, making it impossible for Daniel to do anything but hold on to the other side of the table, and then entered him without further prep.

The saliva lubed Daniel just enough to keep him from screaming in pain. The invasion hurt at first, a lot, but then the head of Gaelen’s cock found his prostate, hitting it just right, as always. Then that familiar slow burn of pleasure-pain began, and his balls ached from the weight of the seed in them. 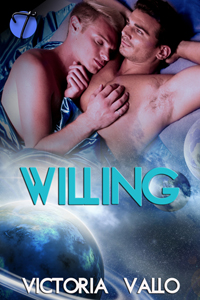 Owned by the Beta (MM)
Jane Perky
In Shelf
$3.50
Tweets by
sirenbookstrand