Gabriel isn't trying to constantly screw up in the Glenwood Springs pack, but it seems like no matter what he does, everything turns out to be his fault. When he lies to his alpha in order to go into town and hook up with a human, things go from bad to worse. Harlow has had enough and sends him off to a nearby pack to join their ranks. He has a cousin there, so he's not completely alone, but being rejected by two packs in less than six months is a hard blow to his over-inflated ego.

Chris has heard a lot about Gabriel before he even gets to the pack, and none of it is good. While Chris is determined to be respectful because his best friend is Gabriel's cousin, that's as far as he's willing to go, and his patience is quickly wearing thin with each of Gabriel's crass comments. When Chris has enough and hits his breaking point, it could ruin Gabriel's chances of ever finding his place in a pack, or it could end up being the push Gabriel needs to learn how to belong. Regardless of what happens, Gabriel’s life is going to change.

Gabriel hadn’t had sex with anyone in nearly two weeks, and the dry spell was making him edgy. It wasn’t that he wasn’t surrounded by plenty of hot guys his age. He was. And most of them were available, too. But there was something seriously screwed up about them. Whenever he tried to get close to any of them, they flipped out, like he’d somehow done something wrong by wanting to have sex with them. In any other pack, a nip on the shoulder or wrapping his hand around their waist would have told them exactly what he wanted, and then he’d be off in the woods with them somewhere getting rid of some of this pent up, frustrating energy. That was how a pack was supposed to be—easy and perfect. Harlow’s pack was anything but, and Gabriel was getting tired of it.

He’d never once in his life thought he would have to resort to sex with humans to get his needs met, but so far, he’d been with three of them in the past few months. They weren’t half bad, either. They weren’t what he expected from the wolves he knew, but they weren’t exactly awful. They were rough in all the right ways, bending him over and giving him what he wanted. Of course, it probably helped that he had a type, and rough, with a bit of a wild streak, played into that perfectly, whether the guy he was screwing was human or a werewolf.

He left the cabin he’d been lazily relaxing in to go in search of Harlow. He wasn’t that hard to find. Gabriel discovered him in the kitchen, sitting next to Lydia and going over some recipe book. They both looked pretty happy as they talked about what they would need from the store. Gabriel didn’t much care what anyone made for dinner as long as he didn’t have to cook it. He hunted, he didn’t cook. That was women’s work.

“I want to go to the library,” he said, cutting in on them. It had been his excuse lately. It was better than telling Harlow he wanted to go get fucked by a human or two. Harlow would have definitely never agreed to that, but his alpha couldn’t really stop him from wanting to read. Since Harlow was trying to heal the wounds the previous alpha had left in the pack, he’d been trying to get more of them to use their library cards and to order ebooks they could read on the tablets he’d gotten everyone.

Harlow looked surprised by the interruption.

Lydia just smiled blissfully his direction. “Gabriel, I think it’s great that you’re taking such an interest in your education lately,” she said.

He nodded. “Yeah. I’m learning a lot. Can I go? It’s only an hour walk there and back. I’ll be back well before sunset. Promise.” He drew a cross over his chest just to drive the point home.

Harlow looked pleased. “I think a library trip is a good idea. See if Miles wants to go with you. I believe he had some books to return and was just waiting for a trip into town to get that errand done. You two can take the truck if you want to.”

Gabriel really didn’t want Miles tagging along, but if he protested, he was afraid Harlow and Lydia would know something was up. He plastered on his best smile and hoped he didn’t look disappointed by being saddled with the omega for the afternoon. “Sure. I’d like the company.” He’d been tempted to say he would love to have Miles along, but Harlow would have seen through that. Gabriel didn’t love being with any of them, and Harlow knew that just like everyone else.

Harlow didn’t look suspicious as he tossed him the keys to the pack truck, which was good. Gabriel didn’t need yet another alpha not liking him. His dad had been bad enough. “Thanks.” He bounced the keys in his hand, happy he wasn’t going to have to walk for an hour to get to the library. In the truck, it would only take about half an hour. Since the road between the pack compound and town was a rough trail for a good portion of the way, driving didn’t help with much more than sore legs.

He turned and headed out of the long house in search of Miles. He was harder to find, but not by much. Gabriel followed Jacob’s scent to the edge of the river, knowing Miles would be with his mate. He found Miles sitting on a large flat rock, reading one of his many books, with Jacob sitting up beside him.

Jacob turned to Gabriel first and narrowed his gaze. But Gabriel showed him the keys and Jacob visibly relaxed. Keys meant they had permission to go somewhere, and everyone knew how much Miles liked going places. “Hey, Miles, want to go to the library with me?” Gabriel called.

Miles pulled himself out of the book long enough to give him a smile. “Yeah. Definitely. Just us or is anyone else going?”

“Just us.” Gabriel hoped Miles would want to stay back. Like a lot of the original pack members, Miles had issues about being alone with the new pack recruits, especially the unmated ones.

But he got up all the same, carefully putting a large leaf into the book to mark his place. “Do you want to come with us?” Miles asked his mate. 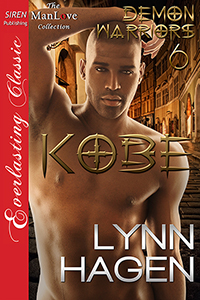 Love of a Human
Liza Kay
In Shelf
$4.99
Tweets by
sirenbookstrand