One day fate decides to smile on Brennus.

He’s hunting in the woods when he is almost seen by a group of Roman soldiers returning to their encampment. He hides until they pass, then decides to bathe in the nearby stream. Naked, he finds a mossy rock on which to lie while the sun dries and warms him.

It isn’t long before his instincts tell him he isn’t alone. He discovers a soldier watching him and leaps to his feet, ready to fight. But fighting is the last thing Cyprian, the handsome Roman soldier, has on his mind.

Over time the men become lovers, finding happiness in a world gone mad. They agree to meet regularly and for a time, they do. Until one day Brennus is captured by the Romans.

Where is Cyprian? Didn’t he see his handsome soldier as he was being led into the encampment? Or will he ultimately be betrayed? 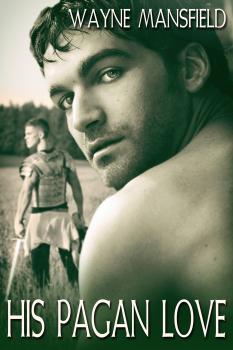 Both men slept through the day and the night that followed. When Brennus woke up, he noticed Cyprian’s breathing had become raspy. He tried to rouse him, but all his lover could manage was an indistinct murmur.

Brennus sat up, leaning back on his arm to watch Cyprian breathing. For the first time in his life he was genuinely afraid. What if Cyprian were to ...? No, don’t even think it. But he had to do something. The blue men. That was it. There was no other choice. They’d have more knowledge and more resources. They could do for Cyprian what a few herbs and bedrest couldn’t.

He pulled on his fur boots and the thickest pelt he could find, which he wore in addition to his regular clothing and cloak. Once he’d readied himself to make the long walk to the village of the blue people, he kissed Cyprian goodbye, tears welling in his eyes.

“Sleep well, my love.” He kissed him once more. “Don’t leave me while I’m gone.”

Glancing back only once, he walked to the mouth of the cave. The winds had dropped a little and, while the sky looked low and menacing, the snow had finished falling. For the moment. He walked up the rugged hillside following a well-worn trail of clay and pebbles to the top and then headed in the direction of the blue men’s village.

It was hard going without snowshoes. Some of the snow was almost as deep as he was tall. It didn’t matter. He’d struggle on no matter how long it took him, and he’d make it to the village. Or die trying.

The journey was made more difficult by his coughing and sneezing. The cold air bit at the exposed skin of his face and hands. It stung his eyes, producing tears which blurred his vision. He had to keep wiping them away on the back of his sleeve.

As he walked he prayed. Pleading with the gods to take care of his beloved Cyprian.

“Please,” he begged. “We’ve come through so much and survived. It would be heartbreak to have to live without him after coming all this way together.” Then he realised what he was saying. He didn’t want to use words like those, words indicating imminent loss and sadness. “Please help him through so when I return he’ll be there to greet me. He’ll laugh at my concern. ‘It was nothing,’ he’ll say. And I’ll feel nothing but happiness that he’s been restored to me. All I can offer you for the return of Cyprian to full health is my love and gratitude, and my undying devotion. Please. Please.”

The coughing started to hurt his chest. After each bout, his throat felt raw, as though just one more cough would tear it to shreds. He scooped up a handful of snow and pushed it into his mouth, temporarily soothing his inflamed larynx.

Perhaps he’d been a fool to come so far north. There were plenty of other places to hide out; a few pockets of his land that the Red Devils had yet to made inroads. While some villages, such as his own, had remained passive, paying their tributes in return for relative autonomy, other villages, other tribes, fought them with everything they had. The blue men were an example of this. It was the reason he’d made the trek in the first place. And now he was making another, equally important, trek. He only hoped when he arrived they didn’t attack him, and that he could make himself understood enough to get help for Cyprian.

As he neared the ridge that overlooked the village, Brennus noticed the clouds taking on a darker hue. There was something in the atmosphere that told him another storm was imminent. A sense of dread washed through him as he struggled on through the snow. Exhausted, it was becoming more and more difficult to put one foot in front of the other. His whole body was numb. His hands were red and his face burned.

He reached the ridge and half-ran, half tumbled down the other side, where the snow wasn’t as deep. On all fours he crawled until he was able to hoist himself into a standing position. For a moment he wavered, unsure if he could go on, but the village was so close he had to force himself.

He reached the defensive perimeter wall and started shouting and banging on it with his fists. With his last ounce of strength, he began to walk the perimeter to locate the entrance, which he knew would be secured against the weather and the invaders. He plodded on and on, aware that at any minute the storm could break and he’d be lost in it forever more. Then he thought of Cyprian, the image of his lover in his mind’s eye, spurring him on.

Finally, he found the gate. Closed and secured as expected. He could have cried if he’d had the strength. He shouted out, his voice lost in the growing wind. His fists on the wooden gate had barely no effect at all. Frustrated he shook the gate, screaming out, the action like fingernails scratching at the lining of his throat.

It appeared this was how it was going to end. With Cyprian dying alone in their cave and him succumbing outside the village of the blue men, so close to help yet unable to reach it. He sank back against the wood of the gate and closed his eyes. His lips parted. Barely audible, he uttered three syllables.