Hollis is done with hanging around the bar on Valentine’s Day. He’s going to stay in -- alone -- and watch some movies. At least, that’s the plan.

But his coworker’s half-brother’s cousin, better known as Ryan, is new in town. And although the lunch they shared was more levels of awkward than a house of cards, fate must want them to become friends, because on his way home after picking up his Valentine’s Day dinner, Hollis runs into Ryan again.

The nice thing to do is to invite him up for dinner -- who wants to be alone in a new city on Valentine’s Day, right? The night leads to a dinner offer in return, a night bowling, a dinner party. When Ryan is relaxed, he’s a lot of fun, but he’s also a lot of work, facing off panic and anxiety in waves. But that isn’t a problem, because friends are there for each other.

And they are, after all, friends. Just friends. Right? 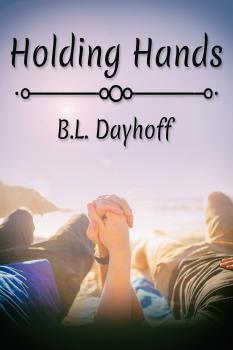 Hollis grinned, bumping his shoulder to Ryan’s before he gave the punch a final stir. “That’s what you said before we went bowling last week.”

“And I was terrible!”

He really had been. Yet he’d also smiled more than Hollis had ever seen before. “But did you have fun?”

Hollis got a glare, which he felt was enough of a yes to continue preparing for the gathering. “It’s only a few friends.”

“Four, but one of them’s Debra, whom you know.”

The doorbell rang and Hollis held out the crackers he’d been setting on a tray. “Can you finish this while I answer the door?”

Ryan frowned and took them.

“No escaping out the window; it’s a long drop.”

“Still hate you,” Ryan mumbled as Hollis walked away grinning.

Thankfully it was Debra at the door with a bottle of wine and a hug.

“Thanks for coming, Deb,” he said, taking her coat. “I’m sure he’ll be happy to know someone besides me,” he added, taking the wine and leading her into the living room.

She raised her brow, but didn’t comment. “Hello again, Ryan!”

Ryan jumped, the box of crackers leaping into the air with him, hanging there a moment before Ryan snatched them to his chest, his cheeks blazing. “Hi.”

“Something smells good. What’s on the menu?”

Ryan shrugged, turning his back on them to continue fiddling with the crackers, even though the tray was full. “Hollis made it,” he mumbled, then escaped to the kitchen with the extra crackers.

Hollis watched him go with a heavy sigh.

“Are you sure this is a good idea, Holly?” Debra whispered. “He doesn’t seem ready for prime time yet.”

He shrugged. “He’s just as nervous around me half the time. I think he needs to be thrown into it. Within reason.” He grabbed the tray of food from where Ryan had left it and set it on the coffee table with the other snacks. “Make yourself comfortable, I better go check on him.”

Hollis found Ryan holding on to the counter, leaning over the sink, panting and shaking. “I don’t think I can do this.”

“Of course you can.” Hollis stepped up beside him and brushed their shoulders together, a show of support without invading his space. “It’s just Debra and a few of my friends. I told them you’re shy; they aren’t going to push.”

“Oh, Ryan…” Screw giving space, that didn’t seem to be what Ryan needed. Hollis rubbed his back in long, sweeping strokes and spoke in soothing tones. “Take a deep breath. It’s going to be okay.”

Ryan struggled to obey, his body quaking under Hollis’s touch as it lifted with the inhalation and sank with the exhalation.

The chest rose and fell five more times before the trembles started to fade, and Hollis stopped stroking his back. “Better?”

Ryan nodded, stood, and straightened his clothes. Hollis let his hand fall casually away, the skin tingling from rubbing against the shirt. Ryan’s face was bloodless and sweaty, but his brown eyes were dark with determination. “Okay.”