A small town reporter on the hunt for a hot story gets more than she expects when she crosses paths with a mysterious private investigator.

Cub reporter for the Five Oaks Gazette, Paige Kenyon, lives a tired life in a tired town. Friendless and practically celibate, it’s looking like another lonely Christmas for a woman who wants nothing more than to find some action.

Smith Dawson, Paranormal Investigator, came to Five Oaks for two reasons: Deliver a message and then take a long overdue break. Living a lifetime of secrets in a dangerous job, he’s earned one. However, when a local reporter has a nasty habit of putting herself in harm’s way, he finds himself reluctantly at her rescue.

Is it possible her lust for adventure will land them both in the obituaries? 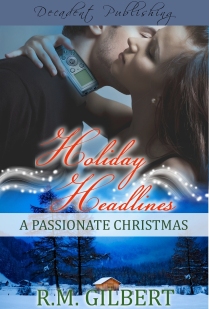 “Fire!” People shouted all around her.

Paige fumbled with the recorder. Excitement rang in her ears. Adrenaline pumped through her veins. The majority of onlookers raced away from the small flames, Paige sprinted toward them. “Yes. Yes. Yes.”

Whirled around by a heavy hand with a tight grip, Paige collapsed against the investigator. Again, the room dimmed. Darkness seeped in as the air pressed heavily upon her.

“What are you doing?” She gasped.

“We need to get the hell out of here.”

“Trust me.” Smith tossed his pie, tin and all, to the floor. He lifted her like a sack of potatoes.

Legs kicking, arms flailing, she pounded on his backside. “Put. Me. Down!”

With each step, his shoulder jabbed uncomfortably into her stomach. For a man with such a lean frame, she could feel Smith’s solid muscles through his clothes. As he rushed past several groups of people and stepped outside, the wind whipped around them. Snow and ice crunched under their weight as he carried her up the east incline. He traversed the ridge with ease. Once they were a good distance from the barn, he returned her feet to the ground. She immediately lost her balance in the snow. Instinctively, Paige reached for Smith to catch herself. His hands gripped firm around her waist as she clung to his shoulders.

It took her all of a second to push out of his grasp.

“What is the matter with you?” she snarled.

Were Love Found Her (MFMMM)
Dixie Lynn Dwyer
In Shelf
$1.99
Tweets by
sirenbookstrand