Atlantis Records mogul Kate Garrison is elated to have married her soul mate, actor Chris Cavanaugh, a crazy counterpart to her uptight nature. After a scandalous meeting that set the paparazzi on fire, and a whirlwind courtship and wedding, she and Chris return to their Hollywood life of movie sets and power struggles. She’s busy with the new business ventures she inherited, which include another record label and part ownership of Pinnacle Studios. As she struggles to adjust to her new elite position in Hollywood, not everyone is happy with her new-found power. And in Hollywood, power is something everyone wants a piece of.

Chris Cavanaugh’s luck keeps getting better and better. He married the woman of his dreams and his talent is finally getting recognized. The movie roles and award nominations are pouring in. Now if he could only convince himself that he deserves all the attention. But rumor has it that Kate’s pulling strings behind the scenes to launch her husband to stardom, now that she owns a majority stake in the movie studio. And rumors like that could threaten everything they have... 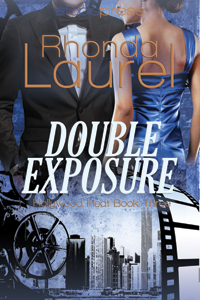 Double Exposure (MF)
Rhonda Laurel
In Shelf
$2.99
All Books In Cart
All Books In Bookshelf
Excerpt
CHAPTER ONE

Kate Cavanaugh sat on the deck ogling her husband Chris as he emerged from the ocean with his surfboard under his arm and his swimming trunks sloped dangerously low on his hips. She hated to interrupt his fun. A great set of waves had been rolling in all afternoon, but she was getting hungry and he’d promised to cook her dinner. She could hardly believe they’d been married for two whole weeks. They had forgone a grandiose media spectacle and had opted for an intimate wedding ceremony at their Malibu beach house with family and friends. Kate had come down the sandy path from the house barefoot, wearing an elegant, strapless white gown. Chris had looked dashing in his tuxedo. After weeks of intensive training Chris was able to get Merlot, their prized Havenese toy dog, to carry the pillow that held the wedding rings all the way down the aisle.She wished they had more time together but with their busy schedules it just wasn’t possible. Chris would begin shooting the scintillating new action thriller Malediction in a month. She had a lot on her plate these days too. Her record label Atlantis was expanding, and thanks to her neighbor Marvin leaving her a substantial chunk of his estate in his will, she was now one of the principal shareholders of Pinnacle Studios and the legendary record label, Blue Vinyl Records.Kate rubbed her belly as Chris approached. “You looked good out there. I’m sorry to pull you away, but I’m famished.”“I can’t have my wife starve. It would be in poor taste.” Chris pitched his short board into the sand and stopped to rinse the seawater off his body.“I prepped the veggies but I couldn’t throw Myrtle and Ted into the pot.” She scrunched her nose.Chris laughed and bounded up the deck stairs to kiss her. “I told you not to name the lobsters when we were at the market.”“But they had so much personality,” Kate pouted. “Remember the way they were waving at us in the tank?”“Uh, Kate, honey, they were trying to break free. A lobster knows that when their hands are bound, they’re on the menu, not up for a round of bondage games.”“You should know.” She looked down at the faint bruising on his wrists. “I hope the marks go away before we return home.”“Don’t want anyone to know your little secret? You like tying me up and having your way with me?” He raised an eyebrow.“Hey! It’s not like you don’t reciprocate, Mr. I-Ignore-the-Safe-Words. Pomegranate, my ass,” she huffed.“I really did think you were just hungry for a snack.” He held back a grin.“Yeah, right,” she said as she led him into the kitchen. “I’m going to take a shower before dinner.”“I’ll join you.” He pulled on the string of her bikini top.“You surfed an hour longer than you should have, so now you suffer the consequences.” Kate gave him a peck on the lips and darted out of the kitchen.