George Pettigrew and his papa must leave the California rancho they'd lived on since his birth. They end up in New York City, where Papa marries and George gets a new beloved mama. George also meets Frank and Bart who become fast friends, and in Bart's case, even more.

The start of the Civil War leaves George the man of the family, but although he’s found a job, it’s difficult to pay the ever-increasing rent. Then Papa dies at Appomattox and Mama falls ill.

After Mama dies, her father takes George’s siblings. When George learns his younger sister is being abused, he rescues the three children. But will dressing his sisters as boys and himself as a woman be enough of a disguise to keep them safe until they can reach the valley he’s dreamed of? Will Bart leave behind his own family and go with the man he loves? 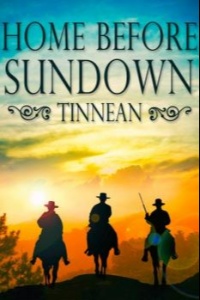 “I’ve been wondering if I should buy a plot of land around here, maybe raise some beef cattle.”

George looked away, struggling for a moment to keep his upper lip from quivering. “If I still had Bella and Salida,” he murmured.

“I’m sorry, I shouldn’t have brought that up.”

“It doesn’t matter, querido. It would take quite a while to build a reputation for the stud. We’ll ... we’d have to go with cattle.”

“Then that’s what you’ll do.” Bart rubbed his back. “Could you afford it?”

“Probably not. I don’t have much of the money left from selling Bella and Salida. But it would be nice. Mama, the girls, Little Thomas, me ... you?”

“I don’t know what I could do to bring in money. There isn’t as much call for homes to be built out here. Not much call for any kind of carpentry.”

“Maybe one day ...” George regarded him with some surprise. “Wait. You looked into that?”

“Not dumb. I wish it would come true.” Bart looked around. “Where is this place? Have we reached it yet?”

“We’re almost there. A few days ago, I found a spot that I thought would be perfect for the two of us.” He smiled at Bart, but inside he regretted the fact they couldn’t live together, whether it was here or the valley in the Dakota Territory.

Bart took the basket from him and slid his free arm around him, and George liked that. A glance showed no one was nearby, and he angled his face up so Bart could kiss him, and he liked that even more.

George leaned back and smiled into his eyes. “We’re here.”

“Huh?” Bart looked around and sucked in a breath.

“Do I ...? Oh, hummingbird, this is amazing.” He looked at the lake that wasn’t more than a few yards from where they stood beneath an oak tree.

“I’m so glad you think so. We can go swimming later. Take out the blanket and spread it under this tree.”

While Bart did that, George reached into the basket and began emptying it of the sandwiches wrapped in paper, the pail of beer, and the cookies Mrs. Hall had made that would be their dessert.

Once Bart had smoothed out the blanket, he toed off his shoes and sat down cross-legged. George did the same and handed him a sandwich.

“Mmm. Ma always had a hand with that.” Bart took a bite and chewed industriously.

George tore off a piece of the bread’s crust and tossed it to a nearby squirrel while he watched Bart. You’re a stupid man, he admonished himself. All Bart’s doing is eating a sandwich, and here you are, wanting to tear off his clothes and make love to him.

He cleared his throat. “Some beer?” He offered the pail to Bart.

“Beer, Mr. Pettigrew? Are you trying to get me tipsy so you can have your wicked way with me?”

George ducked his head, then grinned at Bart through his eyelashes. “Yeah?”

“Then take a drink. We can finish the sandwiches later. I ... uh ... was wondering if we could make love.”

Bart seemed nervous, and that made George nervous. They hadn’t done that before. Well, there hadn’t been enough privacy or many occasions when he and Bart could love each other, but now that the opportunity had arisen, he intended for them to take advantage of it. Especially since Bart had seemed to enjoy it when he stroked a wet finger over his hole.

“Unless you’d rather not?

Bart smiled into his eyes. “If I didn’t want to, I wouldn’t have brought this with me.” He held up a small bottle. “Olive oil.”

“Where did that come from?”

“That wasn’t what I meant.”

“You looked so uncertain.” George blew out a breath. “I was afraid you were having second thoughts.”

“I was afraid you’d think I was being too forward.”