Honor of the Wolf (MF) 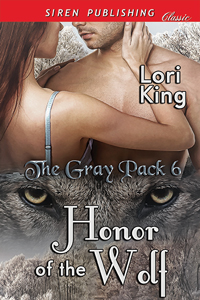 Honor of the Wolf (MF)

Heat Rating: Sextreme
Word Count: 70,849
11 Ratings (4.5)
Contemporary Paranormal Vampires/Werewolves
In Bookshelf
In Cart
In Wish List
Available formats
ePub
HTML
Mobi
PDF
Cover Art by Harris Channing
Reviews
WOW!!! I've been waiting for Luke's story and this didn't disappoint me at all. I loved this book and how he really struggled with accepting Tavi as his mate. Lori is a very talented author and I eagerly await her next book in this series. Hope it's not long!!! LOL
rhondavb
Lori King's Gray Pack series was my first ever shifter books and since then I cannot get enough of this series. As usual Lori made me feel that I was part of this book and the emotions that went through me while I was reading Honor of the Wolf is indescribable. Luke and Tavi's story is my new favorite and I am sure I will re-read it numerous times like the rest of the series.
Diana M
Read more...

More From The Gray Pack

“Why are you here, Luke?” she asked softly, tipping her head to look up at him. In the shadows of the night, he looked lethal and sexy as hell. His granite-sharp jaw worked with tension and his full lips pursed in thought.

“I needed to see you again.”

She shook her head. “Why? Didn’t we say everything we needed to say last night? You’re a young, sexy, single guy looking for a one-night stand, and I’m a tired, single mom. That’s like trying to mix oil and water. It won’t work.”

“You think I’m sexy?” he asked, the corner of his mouth curving up. She laughed, and shook her head. “Look, Tavi, I don’t know why I’m here, or honestly how I ended up here.” The genuine look of confusion on his face concerned her, but it was the honesty in his eyes when he lowered to a crouch in front of her, that really stole her heart. “I feel like there’s something in my chest that’s connected to you. When I try to stay away it pulls me back. I don’t understand it, and I don’t know how else to explain it, but it’s there. I don’t know shit about relationships, so I can’t promise you more, but—”

“Did you hit your head, Luke? I have a daughter. I don’t do one-night stands, and I sure as hell don’t do them with men who stalk me,” she interrupted, frustrated by the deep desire in her heart to say yes.

She gestured around them. “Well I don’t see you visiting so often for the ambiance.”

“I’m not trying to stalk you. Shit. I just want to spend some time with you.”

“So what, you’re going to get to know me out of curiosity?”

“No! Yes. Maybe? I don’t know.” He looked so confused and frazzled that it made Tavi’s heart ache for him. She wasn’t sure she wanted him to know how strong the feelings in her own body were right now.

“When you do know what you want, you know where to find me.” She stood and turned to leave, only to run smack into his hard chest. With a startled yelp she clutched his shirt to keep from falling over. She had no idea how he’d moved so quickly, but she didn’t have time to ask before his mouth came down on hers.

She might have chalked up yesterday’s physical reaction to a fluke, but as he pulled her in close and ravished her mouth she felt her heart pounding in her chest. This was no fluke. This was passion, and a perfect feeling of rightness in the world. Luke fit her like a puzzle piece, and together they were explosive.

Pulling back, she ended the kiss with a gasp of fresh air and a groan of disappointment. There was no way she could keep putting him off if he kept kissing her.

His eyes flashed in the shadows of the night, and she could see his jaw muscle clenching in frustration. “Why?”

“I’ve already told you why. I don’t want either of us to get hurt. You aren’t what I need in my life.” She backed away from him, pulling her coat tight around her chest to combat the icy cold air on her scorching hot body.

“How do you know that if you won’t even get to know me?”

She shook her head and fought back tears. “I’ve already survived one man who convinced me to listen to my body instead of logic.”

A heavy silence settled between them, and Tavi felt torn. Her instincts were telling her to throw herself back into his arms and hold on for dear life. She wanted to spend eternity wrapped up in his embrace. But it just wasn’t the right thing for her, or her daughter.

“I’ve got to get back to work. Go home, Luke, and forget this ever happened.” She made it to the parking lot before he spoke again, but his words echoed in her head for the rest of the night.

Hearing Tavi ask him for the thing he desired most made his balls draw up tight, and his cock twitch painfully behind the zipper of his jeans. With a gentle push, she sat on the edge of the bed with him between her knees. It put her pert breasts at the perfect level for him to devour. Licking the tip of one while he teased the tip of the other, he began to seduce her body with his.

Every stroke was matched with a moan, or a pleasure-filled sigh, and his cock grew harder and hotter. She smelled of jasmine and raw woman. The sexually potent fragrance made his wolf mindlessly happy and wild with the primal desire to sink both his cock and his canine teeth into her, marking her as his own.

He set about worshiping her body with his tongue and his fingers. Falling back on the bed, she murmured words of pleasure and need, sometimes making sense, and other times incomprehensible.

With her pussy spread open to him, he slid his fingers into her pale pink opening, and had to bite his lip at the velvet heat that surrounded them. She was going to be tight. He was larger than most human men, and she was much smaller than he’d expected. Then again, he’d never been with a woman who’d had a child, so he hadn’t truly known what to expect.

What he got was a sexual goddess. She was beautiful, right down to the teeny tiny white lines that dotted her lower abdomen. She bore the scars of her pregnancy, but it wasn’t a turn-off. It actually fulfilled some primal need inside of him to find a woman that could bear his children. A strong mate.

Before he allowed himself to drift too far down that road, he focused his tongue on her sweet cunt, and began teasing her toward her first orgasm of the night. Her flavor was a deliciously salty-sweet blend and the more he got, the more he wanted. The folds of her pussy were soft against his tongue, and moisture dripped from her opening as her hips thrust up against his mouth seeking more from him. He didn’t make her wait for it, instead he focused all of his energy on bringing her to a fast, hard climax. She didn’t disappoint, jerking underneath him as her cunt spasmed around his thick fingers.

To his surprise she was almost completely silent in her orgasm. Her face twisted and her mouth dropped open with a sharp exhale, but no other noise left her throat. If it weren’t for the obvious reaction under his fingers and tongue he would have doubted how good it was for her.

After a few breaths she caught him staring up at her from between her thighs and she blushed. It stroked his ego to see her cheeks stained with pink and her body trembling underneath him.

Bending, he nipped her inner thigh, and she protested. “Ouch! Hey!”

Her cheeks grew even redder, but she returned his grin. “I’ll return the favor if you let me up.”

Luke bit back a growl of need, and shook his head. “As much as I’d love to watch you suck my cock, I’m on the edge of my control already. That will have to wait for later.”

Rising above her, he pressed forward and her thighs spread around his hips in welcome. He kissed his way back up her torso to her sweet tits, pleasuring each one with his tongue, and teeth, before continuing to her collarbone. The moment he reached that thick tendon that connected her shoulder to her neck, his teeth sharpened instinctively. His wolf wanted to mate her, and it was going to take everything he had to resist it.

Burying his face in her hair, he could hear her murmuring words of encouragement as her hands began roaming over his bare chest and shoulders. His jeans felt like they were strangling his cock, and he groaned when her fingers made their way down to his zipper.

“Take them off, Luke, please?”

Her pretty plea was music to his ears, and he rushed to release his erection from confinement. It throbbed against her thigh as he shoved his pants to his knees, and she froze.

“What’s wrong, baby?” Luke frowned in confusion and then realized that she was staring at his cock.

He felt ten feet tall with her staring at him in wonder and appreciation, and he let out a loud laugh. “That’s the sweetest thing anyone’s ever said to me.”

“Well don’t let it go to your head, big guy. You haven’t proved you can use it yet.”

Pressing the head of his cock against her labia, he rubbed it up and down her slit, coating it in her juices. “Open up for me, love.”

She pulled her knees up and back, giving him complete access to her sweet honeypot, and he eased it home. It took several gentle thrusts, but before he knew it he was buried balls deep inside of her hot passage and instinct took over. 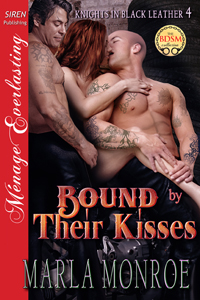 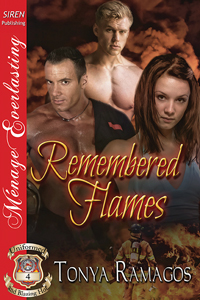 Alpha in Disguise
Afton Locke
In Shelf
$2.99
Tweets by
sirenbookstrand